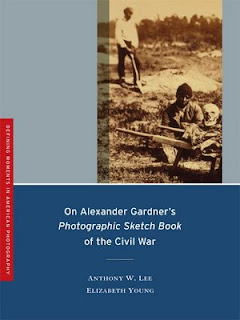 The University of California Press has published On Alexander Gardner’s Photographic Sketch Book of the Civil War by Anthony W. Lee and Elizabeth Young. The first in a new series called “Defining Moments in American Photography,” the small (approximately 8" x 6") volume reproduces 27 of the photographs and discusses them in two essays.

Lee, an art historian, writes about the images; Young, a literary scholar, writes about Gardner’s descriptive texts. The cover shows A Burial Party, Cold Harbor, Va., 1865, picturing African-American men assigned to gather and bury the remains of soldiers killed in battles there in 1862 and 1864. According to Lee, Gardner’s opus, besides being a seminal document of the Civil War, also stands as “a foundational volume in the history of American photography, the first book to rely so heavily on pictures for its meanings.”

My fifteen-year-old son and I spent several delightful days visiting Memphis, where we feasted on BBQ, fried catfish, and Da Blues. The getaway included day trips to Shiloh last Thursday and then back to Brice’s Crossroads on Friday. I wholeheartedly recommend a visit to Shiloh to anyone who has never been there. It is about two hours east of Memphis and is somewhat in the middle of nowhere, which means that the park has a tranquility often missing from other large battlefields. We did the hour-and-a-half CD audio tour by car and then took in a ranger-led side excursion to the “Hornet’s Nest” where we were educated on the many unknown facts and mythology that has grown around that central part of the fight.

I found the statuary to be quite beautiful and the facilities are excellent. On the left is the Confederate Memorial and on the right is the Visitor's Center. 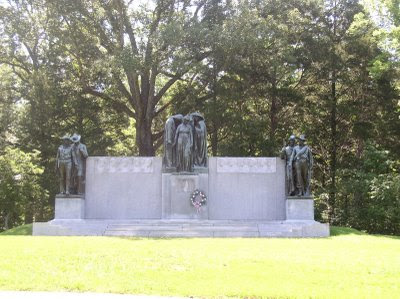 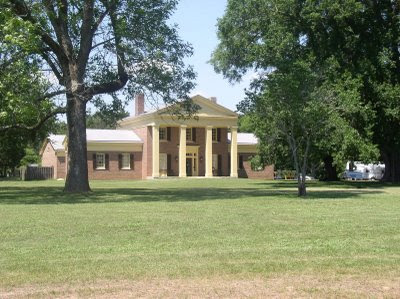 As to books on the battle, the newly-published Shiloh and the Western Campaign of 1862 now appears to be considered the standard work on the battle. Though finally published last year by Savas, it is not a “new” work by any stretch. Its author, the late O. Edward Cunningham, wrote the book in 1966 as his doctoral dissertation at Louisiana State University. Though unpublished, many Shiloh experts as well as park rangers considered it the finest overall treatment of the engagement. Forty years later, editors Gary Joiner and Timothy B. Smith have at last brought Cunningham’s work to life.

From a collectors perspective, the first edition of The Battle of Shiloh and the Organizations Engaged by David W. Reed seems to be the one to have on your shelf. Reed was a Shiloh veteran and the battlefield’s first official historian when the park was created in 1894. His work was the first tactical narrative but apparently only provides detail down to the brigade level. The first edition appeared in a full black cloth binding in 1903 and was a U. S. government-sponsored publication. Veterans of the battle were given a free copy and once supplies were exhausted six years later, a second revised edition was prepared. Copies of the first edition tend to sell between $100 and $200 depending on condition. The University of Tennessee Press has just published a nice hardcover reprint of this long out-of-print title.

Brice’s Crossroads was a much smaller battle and therefore offers a more compact tour of its battlefield than at Shiloh. Its CD audio tour is only about 22 minutes long. The battlefield in fact contains only one acre that’s owned outright by the Federal government (right at the crossroads) however the local Brice’s Crossroads Battlefield Commission has in recent years secured the protection of approximately 1000 acres, thereby preserving the sight of Nathan Bedford Forrest’s greatest tactical victory for future generations. 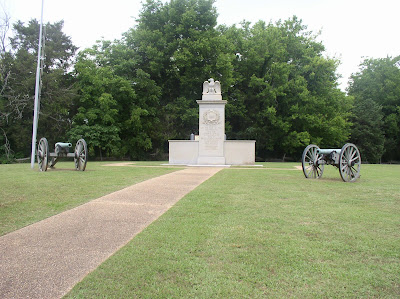 Forrest at Brice's Crossroads and in North Mississippi in 1864 is probably the best-known work on the battle and is a surprisingly tough find in the first edition. The research was originally started by historian Glenn Tucker and was to be published by Morningside Bookshop. Tucker’s untimely death however put a temporary stop to the project. Morningside owner Bob Younger then asked Ed Bearss, a close friend of Tucker’s, if he would take up the mantle and finish the work. Bearrs’ book was published in hardcover by Morningside in 1979 and to the best of my knowledge, did not include a dust jacket. My copy features an austere black binding with gold leaf lettering on the front and spine, though Morningside is presently offering a first edition ($75) in a red binding (no jacket). The book also included some nice maps of the campaigns on the endpapers and internally.

As mentioned before, it is a difficult book to acquire. At present, I found only two first editions for sale on the internet. Even reading copies can be difficult as the title appears to be presently out of print. What’s worse, at the Brice’s Crossroads Visitor’s Center, I found no works for sale that discuss the battle.

Publishers Weekly reports that Chandra Manning has sold her next book entitled Waystations Along a Crooked Road: Contraband Camps, Freedpeople's Relocation, and the Elusive Meaning of Freedom. It's a North American rights deal with Knopf/Vintage. According to PW, Manning, Georgetown professor and author of What This Cruel War Was Over: Soldiers, Slavery and the Civil War (Knopf, 2007) "will explore the dramatic change in the nation's racial climate occasioned by the Civil War, with particular focus on emancipation and race in the North during and after the war."

Is it just me, or do others sense that there are three topics within Civil War research that are "home runs" for authors and publishers? - Those three being Lincoln, Gettysburg, and most recently, revisionist history dealing with race, memory, or a combination of the two.

Posted by Paul Taylor at 8:18 PM No comments:

NASHVILLE — "As the Tennessee State Museum curators gathered information on historic battle flags for a forthcoming book titled Volunteer Banners: The Civil War Flags of Tennessee, a mystery unfolded. Where are the banners that were carried by the Tennessee Union troops who fought in the Civil War?"

Posted by Paul Taylor at 8:12 PM No comments:

My fifteen-year-old son and I will be heading out on Wednesday for a few days of battlefield stomping at both Shiloh and Brice's Cross Roads, two battlefields that I've never been to in the past. Of course, we'll make time in the evenings for some fine Memphis Bubba-Q, and I also plan on educating the lad on the musical wonders of the Blues!

Once back, I'll write up a post that will discuss these two engagements' key books and their respective bibliographic particulars. Hopefully, I'll have some nice photos as well.

Posted by Paul Taylor at 7:56 PM No comments:

Fighting for the Confederacy 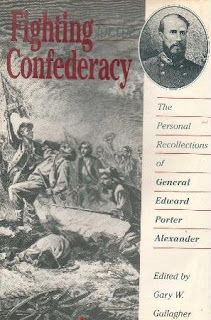 David Eicher presents his Readers Guide of the ten best and most influential Confederate memoirs in the new issue of Civil War Times. Heading the list is Edward Porter Alexander's Fighting for the Confederacy: The Personal Recollections of General Edward Porter Alexander which lay dormant and "undiscovered" for almost eighty years before being brought to life in 1989 under the editorial guidance of Gary W. Gallagher. Alexander was a Georgia native and West Point graduate who was active in nearly all of the Eastern theater's important battles and as Longstreet's Chief of Artillery came into frequent contact with the highest command of the Army of Northern Virginia, including "Marse Robert" and Stonewall Jackson. His perspective on such personalities and on the events unfolding around him is a most valuable one.

The book lay unseen by the public for so long because this version of Alexander's recollections was intended solely for family and close friends, as opposed to his Military Memoirs of a Confederate, published in 1907 by Scribners and which was his public history of time spent in the Army of Northern Virginia. In fact, Gallagher writes in his wonderful introduction to Fighting that it was actually written several years prior to Military Memoirs when Alexander was employed as an arbitrator in Greytown, Nicaragua. Each title though stands as a strong complement to the other. According to Eicher, Military Memoirs is a "superb history of Robert E. Lee's army" while Fighting is an excellent personal narrative with some analysis heaped in. Apparently Alexander pulled no punches in his private narrative, for as Gallagher writes, the author "completely avoided the ritual humility and saccharine praise of friend and foe alike," and even opted not to excise profanities when recalling conversations.

The first edition of Fighting was published by the University of North Carolina Press in 1989 and featured grey boards with gold letters on a half black spine. A mammoth undertaking at around 700 pages in length, it went on to win numerous prestigious awards. Being as relatively new as it is, first editions are not difficult to find. Collectors should note however that the book was heavily printed by the various book clubs. These editions may be easily confused with the publisher's trade edition. Make sure the copy you're examining has the full number row present on the copyright page, beginning with the #1.

Why Do Rare Books Appeal to Collectors?

Interesting article which attempts to answer the above question. Also some good, sound advice from a variety of expert sources:

Begin by collecting only what you like and intend to read. This way you'll get some value out of your collection even if you don't make money.

Condition means everything. If you're serious about collecting, buy the best condition you can afford.

Deal with a seller -- either local or online -- who has been recommended by a friend who's actually done business with that seller.

Check prices you're willing to pay for a specific title against national selling prices, which can easily be found online.

On a limited budget, say $500 to start? Buy four or five titles instead of springing for a single book at that price. You'll learn about the different points of collecting faster.

Nothing has more cache in this field than the words "first edition." But things are not always what they appear to be here -- you'll need to do a little research on your own into what the term "first edition" really means.

Handle with care. Truly rare books should be handled with gloves. Never pull a book off a shelf by the top of its spine. Store in a dry, temperature-controlled room.
Posted by Paul Taylor at 8:58 PM No comments: 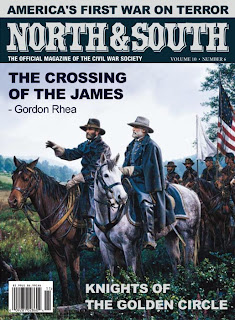 The new issue of North & South magazine is now out and includes my article on the life of Union officer and engineer Orlando M. Poe. I must say that I am really pleased with the article's layout and design. A big tip o' the hat to editor Keith Poulter!
Posted by Paul Taylor at 7:33 PM 2 comments: