The "Battle" of Picacho Pass 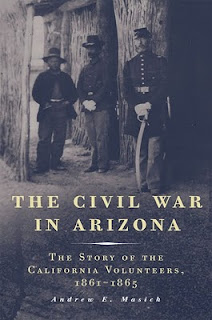 My family and I are currently in Arizona for a combination business trip/family vacation. Yesterday we went hiking at the Picacho Peak State Park, which is located on I-10 about halfway between Phoenix and Tucson. It's also the interpretive home for what's known as the Battle of Picacho Pass, aka Picacho Peak, which has the distinction of being the westernmost action of the Civil War.

It's also the smallest affair that I've ever heard of being graced with the descriptive term "battle." Indeed, the total number of combatants were fourteen Union and ten Confederate. Yes, you read that right. Here and here give good overviews of this April 15, 1862 cavalry engagement. The Civil War Album website has some good pictures of the park's various plaques and monuments, including this panoramic explanation of how the skirmish unfolded. Note that in this view you are looking toward the east across I-10. Picacho Peak is just behind you.

The park's visitor center sells a $6 booklet that gives a broad overview of the Civil War in the Southwest and how this engagement came to be. On a more substantial note, Andrew Masich's The Civil War in Arizona gives a thorough treatment of the Union's California Volunteers who fought in Arizona, which during the war was part of the New Mexico Territory. I picked up a copy at Guidon Books, a Civil War and Southwest Americana bookseller in Scottsdale, Az. since 1964.

On a more somber note, I've also learned that this engagement and its state park home are on the Civil War Trust's 2010 list of ten most endangered sites. See here for full particulars.

Posted by Paul Taylor at 7:21 PM No comments: