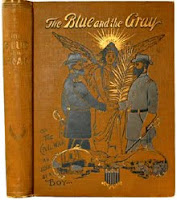 The Civil War was perhaps the quintessential American experience. It features battles, political intrigue, espionage, technology development, foreign relations, civic duty and citizenship, patriotism, nationalism, philanthropy, humanitarian assistance, liberation, and military occupation and much more. However, the one common thread throughout all the adjectives in the preceding sentence is that people were the means and the ends of each of these words. These words have a flesh and blood quality in rhetoric and reality. 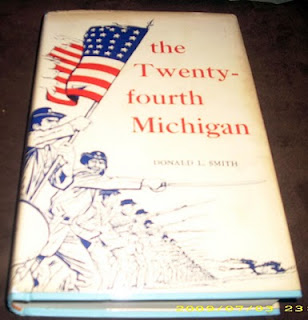 The Twenty-fourth Michigan Infantry is probably the most famous of the thirty volunteer infantry regiments that were born in the Wolverine State during the Civil War. That fame begins with the regiment's creation, for it was recruited from Detroit and surrounding Wayne County in July and August 1862 following Lincoln's call for 300,000 more men. The city leaders felt Detroit had suffered an embarrasing show of public Copperhead sympathy that summer during a downtown "war rally" and as a means of showing the city's proper patriotism, Detroit's leading citizens obtained permission from Governor Austin Blair to raise an additional regiment from Detroit, in addition to the six other regiments that were then in the process of being formed around the state.

Many of Detroit's leading citizens volunteered for the Twenty-fourth, which was also known as the "Detroit and Wayne County Regiment." In fact, its colonel, Henry Morrow, had served as Recorder's Court Judge prior to gaining permission to form the Twenty-fourth.

The Twenty-fourth went on to fight in all of the great battles of the eastern theater as part of the legendary "Iron Brigade," which was comprised of the Second, Sixth, and Seventh Wisconsin, the Nineteenth Indiana, and the Twenty-Fourth Michigan. At Gettysburg, the Twenty-fourth suffered the greatest number of casualties of all Union regiment. They went into the first day's fight with 496 men. When the smoke cleared, only 99 were left to gather round the flag.

The first regimental history was the History of the Twenty-fourth Michigan of the Iron Brigade by Orson Blair Curtis. Blair served in the unit and published his reminiscences in 1891. First editions of that title are scarce and very pricey. (Copy to the right is a facsimile reprint offered here.)

Over seventy years later, Donald Smith authored The Twenty-fourth Michigan of the Iron Brigade. Published by Stackpole Books in 1962 during the ACW centennial, the work was, according to Nevins, "a thouroughly complete, twenty-five year labor of love" that featured ample amounts of primary sources unavailable in Curtis' prior work. Smith's work is included in Eicher's bibliography (#1072) and is described as an "excellent survey, which deserves a place in the regimental section of every library." As shown here, first editions are not uncommon, however like most fifty-year-old books, the book's condition as well as that of the jacket will greatly influence price and if in fine condition, expect to pay in the $50-75 range.

Posted by Paul Taylor at 7:45 PM No comments:

The battle never ends. Check it out.

"The most effective dust management starts before a book ever reaches the shelf. "When I buy a book, I will carefully open it and slam it shut several times," he said. "Sometimes these big balloons of dust will cascade to the floor." This is where dust belongs, he said, down at vacuum level. Next, "you sort of riffle the pages." Finally, he will run a dry paintbrush along the edges.

As protocols go, it's a good one, Garner said. Yet at the same time he is dusting his books, many thousands of them are turning to dust. Acid paper, which was ubiquitous between 1870 and 1970, "tends to self-destruct," he said.

There can be a gloom to antiquarian book collecting — the authors are dead, we are dying — and the dust doesn't help. Garner likes to place musty books of questionable provenance in the sun to cure. And he opens the windows and airs out the house every two weeks, preferably after a good rain has knocked down the dust outside."