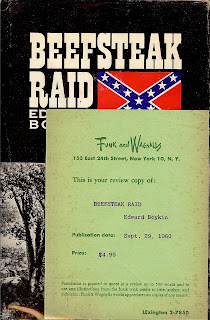 With food supplies running precariously low, Confederate General Wade Hampton led several thousand of his best cavalrymen from their positions near Petersburg in September 1864 on a 100-mile raid to “acquisition” approximately 3,000 head of cattle which were corralled behind Union lines at the plantation of Edmund Ruffin, only a few miles away from Gen. Ulysses S. Grant’s headquarters.

The surprise attack was a success, though somewhat of a hollow victory for the Rebel's meager rations had left them with almost no grain to feed their new prizes. This meant they had no choice but to quickly slaughter the cattle, and with no means of preserving the beef, Confederate troops had to quickly consume the meat before it spoiled. Within a matter of days, their hunger returned.

Martha Boltz has written a nice account of this affair in the Washington Times however for those seeking a narrative with a bit more "meat," Edward Boykin's Beefsteak Raid is the work to turn to. Published by Funk and Wagnall's in 1960, this is a surprisingly difficult book to find in the first edition and in collector's condition. Well, at least for me, as I have never been able to find a copy that meets both of those criteria. Every copy I have ever come across in shops, bookfairs or online has been either a second edition, an ex-library first edition or in poor condition if it was a first. The black dust jacket seems especially susceptible to wear and tear.

As you can see here, there are only four copies currently for sale on ABE, and all are either second printings or in less than fine condition. I have not read the book though the standard sources offer mixed reviews. Nevins describes this micro-history as "undocumented and thin but entertaining" while Eicher has the work listed in his analytical bibliography, describing it as "fast-paced" and "readable."

UPDATE May 29, 2014: At long last, I have come across a very nice first edition at a very good price. And it's a review copy no less with the 1960 publisher's review slip laid in (pictured above).

Posted by Paul Taylor at 5:37 PM No comments: