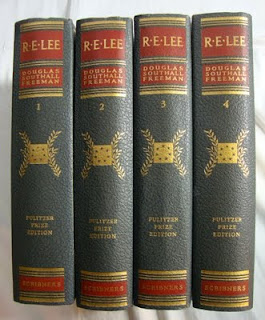 I was doing a bit of internet surfing the other night and came across a description of Douglas Southall Freeman's legendary four-volume biography of Robert E. Lee from the C. Dickens Fine & Rare BookSellers in Atlanta, Ga. It reads in part:

When approached by Charles Scribner's Sons in 1915 with the request for a biography of Gen. Robert E. Lee, CSA, Douglas Southall Freeman embarked on a 19-year journey that would finally produce the epic four-volume R. E. LEE in 1934. This set won a Pulitzer Prize in 1935 and has become one of the most respected biographies ever written.

Freeman, realizing that many biographies of Lee had been written prior to his accepting the task, sought sources that had been rarely, if ever, consulted. These sources included: the records of the Bureau of Engineers and of the United States Military Academy; collections of Southern families that included Lee's letters; correspondence and memoirs of those who served with and against him in the War Between The States; and the files of Washington and Lee University.

The portrait of Lee that Freeman paints in these four volumes is that of a true leader, who was loved by his troops and respected by those who opposed him. Lee was able to exhibit some of the best qualities of humanity in some of the most inhumane situations. In example after example, Freeman introduces us to this noble Victorian.

Along with its companion set, Lee's Lieutenants (also by Freeman), R. E. Lee provides a realistic, informative and sympathetic portrait of "Marse Robert", a man loved and respected in victory and defeat.

A first edition set of Freeman's biography of Lee is by any measure a cornerstone for Civil War book collectors and, almost needless to say, can be quite pricey. The work was published by Charles Scribners, bound in red cloth with gilt lettering on the spine, and in a slipcase. First editions are indicated by the Scribner "A" on the copyright page. Sets with a Freeman signature are even more rare, as seen here.

After winning the Pulitzer Prize, Scribners published the four volumes in a "Pulitzer Prize Edition," (pictured) which is far more affordable and visually more attractive. The second printing of Pulitzer Prize Edition was housed in a wooden crate that is now quite rare. The crate is printed on two sides with "R.E. LEE, 4 VOLUMES, PULITZER ED., SCRIBNER'S". Any set that includes the original slipcase or wooden crate will command a premium.

Does "Following the Flag" Also Apply to Civil War Books? 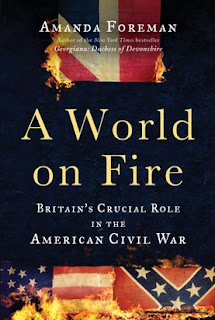 In the world of collecting first editions, serious collectors want the first printing from the country where the book in question made its first appearance. This is especially the case for any fiction genre, whether its literary fiction, science fiction, mysteries, etc. So if collectible author "A" has a new novel that appeared in England a week or so prior to its publication in the U.S., that British edition is the one many, if not most collectors will want. A well-known example is the Ernest Hemingway novel Across the River and Into the Trees, which was published by Jonathan Cape in England three days prior to its publication by Scribners here in the states.

If you consider yourself a Civil War first edition book collector, do such "rules" matter to you? Let me know, as I'd love to read your opinion on this.

My question is prompted by the recent publication of A World on Fire: Britain's Crucial Role in the American Civil War by acclaimed British historian Amanda Foreman. This much-hyped, 1008-page epic has just been published in the states by Random House to stellar reviews and may very well become the standard work on the subject.

Since the author is British, I went to Amazon.uk to see if the book had been published there. Lo and behold, I discovered that it was first published in England on Nov. 4, 2010 by Allen Lane Publishers with the slightly different title A World on Fire: An Epic History of Two Nations Divided. So for me at least, that's the edition I will buy. Does such minutiae matter to any other book-loving Civil Warriors, or is such hair-splitting limited to the fiction genres?

UPDATE Aug. 21 - My book has arrived from England and to my surprise, it's a signed copy!