I just received the following email from Morningside Books and thought that fellow travellers may be interested:

Morningside has always carried many Civil War books by other publishers as well. As the business is reorganizing, we are adjusting our inventory. As part of this reorganization, we are offering many books for sale. These are books that will be sold at the sale price until they are gone and not restocked. Many of them are down to one copy left. Please see the pdf file listing books for $5, $10, $15, and $20 each. Click here for the list

To order, you can call or email, as we need to check stock to make sure the book you're looking for isn't sold out. Once we've verified it's still here, you can pay with a credit card, or we'll hold the book if you prefer to send a check. Please make checks payable to Gatehouse Press. Shipping is $6.00 for the first book and $2.00 for each additional book.

We're currently reworking the Morningside and Gettysburg Magazine websites to update them and combine them into a Gatehouse Press website. We'll let you know when it goes online. We'll also be sending out soon a listing of some of our rare and used books for sale.

Posted by Paul Taylor at 3:39 PM No comments:

MARSHALL, AR – After the mayor of a small Arkansas town flew the confederate flag in observance of Robert E. Lee’s birthday, the city council passed an ordinance Monday saying only the US flag and Arkansas flag can be flown on city property.

By flying the flag from the city hall flagpole, the city of Marshall was giving a de facto endorsement of the flag and what it represented, which the local African-American community and possibly a notable portion of the white community probably found deeply offensive. While other members of the community may resent that "their" flag cannot be flown from the city flagpole, I think it's pretty obvious that the message of formally flying the Confederate battle flag on MLK's holiday is viewed by those offended as a big one-fingered salute to the African-American community. Let's keep the Confederate battle flag where it belongs: properly preserved and interpreted in museums and history books.

And as for the bit about "our heritage," Southern culture and heritage is a glorious and diverse one that spans well over 300 years. Why is it that some folks insist on drilling down to only those four years and basically ignoring the rest?
Posted by Paul Taylor at 1:04 PM No comments:

The Organization and Administration of the Union Army

January 24 Update - Mr. Robert A. Clark, current publisher of the Arthur H. Clark Company graciously replied to my email query from yesterday regarding the initial print run for this title. He states that the work was published in an edition of 750 copies. Further, he writes that "Many of the Clark Company’s catalogs stated that only 475 sets were printed, but all our publication records show that 750 sets were delivered by the bindery." Either way, that's a fairly small number. When you factor in all the sets that may have been lost or sullied over time, coupled with all of those that are/were in public libraries, it's easy to see why fine copies of this book are very collectible. 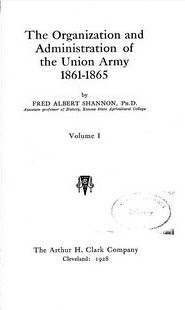 Today’s post is about an older but still important work titled The Organization and Administration of the Union Army 1861-1865, which explains how the Union army evolved from a small peacetime force into a potent military machine approaching one million men by the time the Civil War ended in 1865. It was written by Professor Fred Albert Shannon (1893-1963) and published as a two-volume work in 1928 by the Arthur H. Clark Company of Cleveland, Ohio at a then-whopping list price of $25. As you can see by this inflation calculator, $25 then equals $310 today! Nevertheless, the work’s impact and importance was such that it was awarded the Pulitzer Prize for History in 1929.

The books’ primary focus was on the evolution of northern military policy regarding the enlistment and recruitment processes of the army. Shannon also discussed the inter-actions and relationships between the national and state governments in dealing with the problems and solutions pertaining to recruiting, training, equipping, and supplying the soldiers. The author relied heavily on a detailed analysis of census data for much of his conclusions. (As a sidebar, Shannon devoted an entire chapter to what he termed “The Slacker Problem,” which discussed the “skedaddlers” and others who avoided voluntary enlistment or the draft at all costs. I humorously thought “slacker” was a more contemporary term, but was obviously in use eighty-five years ago with the same meaning as today.)

Though definitely a scholarly work, the book nonetheless has an easy to read feel to it. Not surprising, for in the research for this post, I learned that one biographer described how Shannon strove to write history from the perspective of an average American. Shannon believed in common man values as the primary shaper of the United States and as such, held the wealthy in low regard. His interest in this topic first began as a student at Indiana University. After graduation, Shannon taught history at Iowa Wesleyan College for several years starting in 1919. Upon earning his doctorate in 1924, Shannon became an assistant professor of history at Iowa State Teachers College. In 1926 he was appointed associate professor of history at the Kansas State College of Agriculture and Applied Science where he became a specialist in American social and economic history during the Civil War and antebellum periods.

First editions of this two-volume set are bound in dark blue cloth with gilt lettering and trim on the spine. The top edges of the pages are also in gold gilt, which seems to have been the Clark Company’s standard format, for as one admirer of the press wrote in 1963, “…the handsome octavo volumes with the ivory-laid, deckle-edged, uncut pages and the distinctive gold bands and prominent lettering on the spine have long been recognizable on library shelves as ‘Clark books’.” This definitely would have been considered a “fine press” work from back in the day. Like Neale books, the Arthur H. Clark Company also seems to be collected in its own right as a specialty publisher of western Americana, as the existence of this 1993 bibliography attests. The Arthur H. Clark Co. still exists today as an imprint of the University of Oklahoma Press. As for this specific book, the title and copyright pages should have matching 1928 dates in order to confirm first edition status. As you can see from ABE, first edition sets of this work that are not library discards and in solid condition tend to command prices in the $300 range. 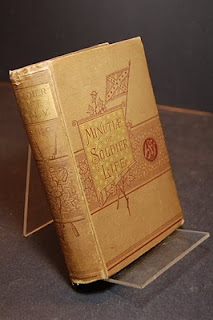 A year ago I posted about John Billings’ timeless Hardtack and Coffee, considered to be the standard work about the common soldier’s life in the Union army, written, of course, by one who was there. Today’s post is about a book titled Detailed Minutiae of Soldier Life in the Army of Northern Virginia 1861-1865 which tells the story in homespun style of what the common Confederate private went through on a day to day basis and therefore stands as a companion volume to Billings’. One reviewer notes that McCarthy’s comments “are charming discourses on uniforms, camp life, rations and marches” while Nevins describes the book as “deserving of its reputation as ‘the most interesting and informative of all memoirs written by privates.’” The illustrations by fellow Confederate, William L. Sheppard, only add to its luster.

The book’s author was Carlton McCarthy (1847-1936) who by one account was a well-educated child with upper class upbringing. Due to his youthful age, McCarthy served in the Richmond home guard until he could formally enlist as a private with the Richmond Howitzers in 1864, ultimately surrendering with that unit at Appomattox on April 9, 1865. McCarthy’s older brother was a Confederate captain who was killed at Cold Harbor and served as an inspirational source for much of his material.

Kevin Levin of Civil War Memory gives an insightful review of McCarthy’s work as it pertains to the disbanding of the Confederate army following Appomattox and the soldiers’ journeys home.

Following the war, McCarthy took up his pen and wrote this book about his experiences in the war. The work was first serialized in the Southern Historical Society Papers between 1876 and 1878. Its first appearance in hardcover was an 1882 self-published, 224-page effort prepared by “Carlton McCarthy and Company” that featured a tan colored, embossed cloth binding with black and white plates internally. A second edition followed in 1888. Like any desirable book of this vintage, the price for a first edition will vary greatly with the condition. As you can see here, they’ll range from $27 for a truly beat reading copy to $350 for a copy in pristine condition. The pictured copy is an author-inscribed first edition and is offered for sale here.

McCarthy also served as the mayor of Richmond from 1904 to 1908. He passed away in 1936 and is buried at the Riverview Cemetery in Richmond.

Book Collecting in the 21st Century

I just discovered this online video presentation and wanted to share it with visitors to this blog. It is certainly an apropos topic. In it, Mr. David Gregor, book collector and owner of Gregor Books in Seattle, gives a slide presentation on the fundamental principles of book collecting in the 21st century. Enjoy.

Posted by Paul Taylor at 8:44 PM No comments: