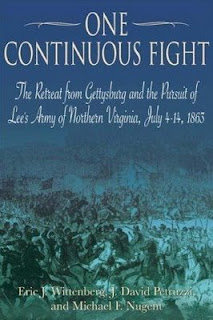 Savas Publishers have produced a special "Gettysburg Edition" of One Continuous Fight: The Retreat from Gettysburg and the Pursuit of Lee's Army of Northern Virginia, July 4-14, 1863. The edition is limited to only 75 numbered copies and is in similar style to the authors' Plenty of Blame to Go Around.

"One Continuous Fight draws upon a massive array of documents, letters, diaries, newspaper accounts, and published primary and secondary sources. These long-ignored foundational sources allow the authors, each widely known for their expertise in Civil War cavalry operations, to describe carefully each engagement. The result is a rich and comprehensive study loaded with incisive tactical commentary, new perspectives on the strategic role of the Southern and Northern cavalry, and fresh insights on every engagement, large and small, fought during the retreat.

The retreat from Gettysburg was so punctuated with fighting that a soldier felt compelled to describe it as "One Continuous Fight." Until now, few students fully realized the accuracy of that description. Complimented with 18 original maps, dozens of photos, and a complete driving tour with GPS coordinates of the entire retreat, One Continuous Fight is an essential book for every student of the American Civil War in general, and for the student of Gettysburg in particular."

8/21 CORRECTION - I've learned that only the authors will be signing this edition.

Here's another regional small press collection of previously unpublished letters, this time courtesy of the Martha Vineyard's Museum / Historical Society in Edgartown, Massachusetts. The book debuted just a few days ago on July 24 and features the letters of Charles Macreading Vincent, who was 19-years old when he enlisted in 1862. I was not able to determine from the initial story what unit Vincent served in, however according to the online Massachusetts Civil War Research Center, a Charles M. Vincent served in the 40th Massachusetts Infantry.

The book's full title is Your affectionate son, Charlie Mac: Civil War Diaries & Letters by a Soldier from Martha's Vineyard. It runs 292 pages and costs 16.95, which leads me to conclude that it's a paperback. Full online story here.

Posted by Paul Taylor at 2:55 PM No comments:

As any seasoned book collector can tell you, the presence or lack of a dust jacket can seriously affect the value of a collectible book. This is especially the case for all genres of early fiction where a pre-WWII jacket can increase the value three or four-fold in some cases. Books issued after, say 1965, that do not have their original dust jackets are generally of little value to first edition collectors.

Initially, book publishers and even collectors placed little emphasis on jackets believing them to be nothing more than a marketing tool while the book was on the bookseller's shelf or simply as a protector for the book itself. By WWI however, collectors began to have second thoughts as they now came to view the dust jacket as an integral part of the book itself.

Such is the importance given to these artistic wrappings that recent years have seen the rise of a cottage industry dedicated to the production of vintage facsimile dust jackets that collectors can then match up to their jacketless first editions. It must be stressed and cannot be overstated that from an ethical standpoint, these modern reproductions must be identified as such and therefore do not increase the first edition's value at all beyond the price of the facsimile. Collectors buy them simply for their artistic merit and as conversation pieces. Unfortunately, the handful of facsimile dust jacket websites that I've discovered online are all dedicated to various fictional genres. These sites include Lady Bluestocking, Facsimile Dust Jackets LLC, and Recoverings, which is solely dedicated to Edgar Rice Burroughs.

If anyone out there is aware of a site that reproduces vintage Civil War dust jackets, please let me know!

Forty-Six Years in the Army 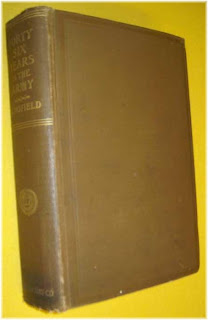 Acquiring a first edition of Lieutenant General John M. Schofield's military memoirs will provide the Civil War book collector with quite a collecting coup but offers little in the way of great historical analysis. Though reading copies are quite easy to come by for the book is still in print, first editions are exceedingly rare with prices for premium copies often commanding in excess of $500. While they're for sale on ABE, I don't recall ever seeing a copy for sale in a bookstore or at a book fair. All of which is a bit surprising for the book was first published by The Century Co. (of Battles and Leaders fame) in 1897, which was the book division of the The Century Magazine, regarded as the leading periodical of the 1880's and 1890's. Though Schofield's public stature (he retired as General of the Army) was certainly not equal to Grant's or Sherman's, one would think that ample copies would still be around. Nevertheless, they are surprisingly scarce plus this massive, clothbound, 557-page tome did not wear well over the years.

Not only in the physical sense, but from a literary perspective as well. For instance, Nevins complains that "what could have been and enlightening and valuable memoir is little more than a critique of published official reports on the engagements of which Schofield was a part," while Eicher describes Schofield's memoirs as "a mishmash of notes and rememberances strung together chronologically in a rather diasappointing fashion."

As a brief overview and according to the Arlington National Cemetery website, "Schofield graduated from West Point in 1853, ranking seventh in his class. He served throughout the Civil War in command positions, receiving the Medal of Honor for heroism in battle. He remained in the Army following the war and was the military officer who recommended that Pearl Harbor, Hawaii, be established as a military base by the United States. From 1876 to 1881 Schofield was Superintendent at West Point. After serving in various departments throughout the country he succeeded to command of the entire Army upon the death of Lieutenant General Phil Sheridan. Schofield was retired for age on his 64th birthday and died in Saint Augustine, Florida, on March 4, 1906. He is buried in Section 2 of Arlington National Cemetery. Pictured copy for sale here.

Posted by Paul Taylor at 6:21 PM No comments:

I've written several times in the past as to how I'm always on the lookout for new regional, small press publications. Though often of varying literary quality and "importance," these books nevertheless showcase previously undiscovered letters, diaries, or journals from rank-and-file soldiers who hailed from the various regions around the country.

One such new title is the just-published Hard Times, Hard Bread, and Harder Coffee, a 227-page softcover that presents 128 previously unpublished Civil War letters of Hezekiah Long of South Thomaston, Maine. Long enlisted in the Union army in the summer of 1862 and served in the legendary 20th Maine Infantry until the end of the war. The book has been published by Richardson's Civil War Roundtable and I believe sells for $19.95. Full online story here.

Posted by Paul Taylor at 9:02 PM No comments: 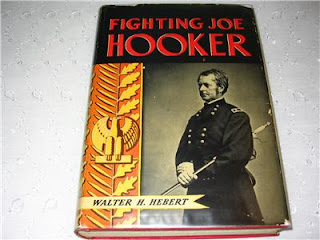 I recently scored a lovely first edition (so stated) of Walter H. Hebert's Fighting Joe Hooker, which was originally published by the Bobbs Merrill Co. in 1944. This 64-year-old book even features a nice example of the now very uncommon dust jacket, complete with the $3.50 price on the jacket flap. As the book was published during WWII, the back panel features a plea from the author for the public to buy United States War Savings Bonds! This is the publisher's trade edition, however it appears that the publisher also prepared a signed limited edition. On a special tipped-in page, it reads "This edition of Fighting Joe Hooker is limited to 250 copies of which this in No. --."

Amazon describes the book as the "definitive biography of a man who could lead so brilliantly and yet fall so ignominiously remains [to this day] the only full-length treatment of Hooker's life. His renewal as an important commander in the western theater during the Chattanooga and Atlanta campaigns is discussed, as is his life before and after his Civil War military service." According to Nevins, the work is "A critical study, based on extensive research: contains a fine account of the Chancellorsville campaign."

I recall reading a story on the web where one collector was asked why he only bought first editions. He responded by saying, "because I can't afford not to." The point being that a first edition is the only book which may return its original purchase price to the buyer. Of course, there's no guarantee that it will, but it could. This book illustrates that concept perfectly. I paid thirty bucks for the book, including shipping, and I consider that a bargain. I don't think it will ever depreciate. Meanwhile, Fighting Joe Hooker is still in print in paperback format from the University of Nebraska Press at $21.95. Same price at Amazon. If you buy a new copy, it depreciates immediately upon purchase. If you go to sell it, you'll get a few bucks at best. 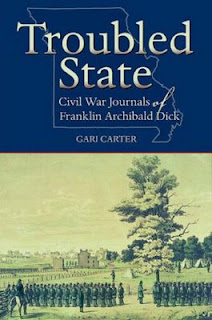 Interesting new book from Truman State University that seems to be getting some nice press in the midwest. Read here and here.

According to Amazon, "A benefit to scholars and buffs alike, the journals of Franklin Dick offer readers a different perspective on the Civil War from the contested and bloody battleground that was Missouri. The diaries provide valuable insights on how Unionists reacted to the shifting fortunes of war in Missouri and in St. Louis in particular, and how the life of a St. Louis attorney-turned-provost-marshal changed for all time. The annotations are helpful without being obtrusive, allowing Dick's personality to come through."

Posted by Paul Taylor at 8:28 PM No comments: