Time for a Celebratory Cigar 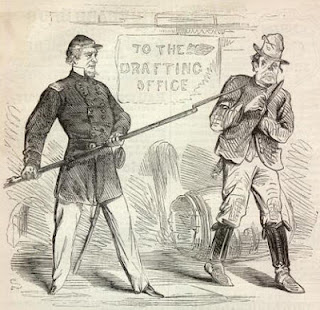 I'm thrilled to announce that the final draft of my new work has been completed. As I've mentioned before, its working title is "Old Slow Town:" A Social, Political and Military History of Detroit during the Civil War. I turned the manuscript in to Detroit's very own Wayne State University Press earlier this week which means the peer review process now begins. If all goes as hoped, we should be looking at a Spring 2013 pub. date.

This was quite a challenging book as the various social and political issues heavily present in Civil War-era Detroit, i.e. draft resistance, race relations and labor unrest, all required a significant amount of analysis and study. Such home front issues were simply not pertinent in my past works. Plus, it was quite interesting to learn how concerns over street violence coupled with the fear of Confederate raids from Canada affected the local military authorities.

By the way, the caption to this August, 1863 Harpers Weekly draft cartoon is "Don't you see the point?" Indeed.

Posted by Paul Taylor at 3:58 PM No comments: 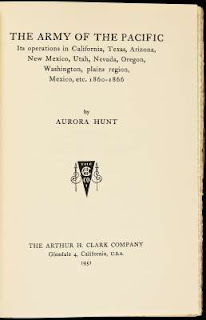 I'm a total novice when it comes to Civil War operations in the far west and as part of my recent interest I came across The Army of the Pacific: Its Operations in California, Texas, Arizona, New Mexico, Utah, Nevada, Oregon, Washington, plains region, Mexico, etc. 1860-1866 by Aurora Hunt (1881-1965) and published by the venerable Arthur H. Clark Co. in 1951. Readers may recall that I first wrote of this fine press when I posted on The Organization and Administration of the Union Army back in January 2011.

According to one online writer, “the name ‘Army of the Pacific’ described both Union volunteer units recruited to stay in the Pacific coast states and territories, guarding them from natives and supposed Confederate incursions, and the mix of Regular and volunteer Union units known as the ‘California Column’ sent off to deal with Confederate regulars and irregulars in Arizona and New Mexico. Although they did fight the westernmost land battle in the Civil War (at Pichacho Pass in Arizona) against a few Confederate scouts, by the time they got to New Mexico the Confederates under General Sibley had been turned back at Glorieta Pass and retreated all the way to Texas, and the Californians were put on garrison duty, had occasional Indian encounters, and engaged in minor persecution of Mormons. The ones left behind didn’t have much excitement either, with a few miscellaneous skirmishes against various tribes and now and then the arrest of some real or imaginary Confederate agents.”

The Arthur H. Clark Company published this book as the first volume in their distinguished Frontier Military series. As for the author, her study was based largely on primary sources, including information obtained directly from the soldiers' descendants and rare territorial newspapers. Though the book may at one time have been considered the standard work, it now appears to be a bit dated though still quite useful. Other criticisms (Nevins) include that at 400+ pages, it was far longer than it needed to be. Nevertheless, as it was published by the Arthur Clark Company, it has maintained a high level of desirability among first edition collectors.

Like all Clark books, the work was published in dark blue cloth covers with gold gilt lettering on the spine and top edges of the sheets. The paper was a heavy, cream-colored stock with deckled edges, just what you would expect from a fine press. This one also featured 17 sepia plates and a fold-out map. I do not believe there was a dust jacket per se with this book though one bookseller reported to me that the book came in a plain white jacket with a hole cut in the front for the book’s front panel lettering to show through. As you can see here, fine first editions are not that common, with most of those available being ex-library. One bookseller reports that 1023 copies were printed.

In more recent years, the book was reissued by Stackpole and is readily available.