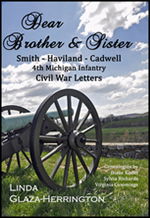 This post is about a new, self-published book I just learned of that has a family connection on my wife's side. Dear Brother and Sister brings to light for the first time 56 previously unpublished letters from three young men named Austin Smith, Deloss Haviland and Lewis A. Haviland, who enlisted in the 4th Michigan Infantry in June 1861 and then wrote home to their brother Russell M. Cadwell, and their sister Harriet Smith.

The book's author, Linda Glaza-Herrington, had no initial intention of creating a book, but merely transcribing these long-held family letters for posterity before the poor quality ink completely faded away. One thing led to another and before she knew it, the author had assembled a 520-page work featuring over 75 photographs of family ancestors, and pertinent Civil War photographs and drawings from the Library of Congress. Ample context abounds to explain the setting of each letter and how the 4th Michigan was engaged at the time. An overview of the 4th Michigan's activity may be found here.

Dear Brother and Sister will primarily appeal to family members of the Smith, Haviland, and Cadwell families, genealogists, and of course, those with an interest in the 4th Michigan Infantry. By the way, a phenomenal, four generation descending genealogical outline of the various generations down to the present day exists in the back of the book.

As occasionally happens with such efforts, I discovered that the book has an interesting publishing history. In perusing a hardcover copy of the book owned by a northern Michigan neighbor, I noticed that the copyright page said "Second Edition" which struck me as odd considering that this is a brand new publication. I then wrote to the author and asked her if there might be any first editions still lying around. She replied as follows: "The first edition was the paperback published by Schuler Books & Music and is the version with the ISBN that was sent to the Library of Congress. However, family members almost unanimously indicated they wanted a hardcover copy of the book. So, since Schuler's had no problem with it, I ended up self publishing the identical text as a hardcover book through LULU. That's why the paperback is the "first edition" and the hardcover is the "second edition."  Since the texts are identical, the hardcover is actually the "first hardcover edition."

The author has prepared a website that further promotes the book.

Posted by Paul Taylor at 9:00 PM No comments: