I once read somewhere that blogging can become like an addictive drug. Not only thinking of things to post about, but also commenting at others sites and then of course, checking back to see if anyone responded and so on and so forth. Speaking solely for myself, I’d have to concur with that observation.

I had no idea what to expect when I started this blog fifteen months and close to 200 posts ago. At the time, and still for that matter, it was nothing more than a lite diversion; a means of sharing an enjoyable book collecting hobby with others of like mind, and perhaps a way to release the frustrated teacher in me. I’d say it’s been successful. The bibliographic research involved with this blog has certainly helped me learn more about various Civil War books, hit counts have steadily increased, and feedback has been positive.

But there’s been a downside, relatively speaking. It has seriously taken away from the time I could have been working on more serious stuff, like my next book for instance. For me anyway, blogging has started to give the illusion of productivity; whereas in the past I may have viewed my writing day as successful if I hammered out several pages of book-related narrative, I now measured it instead by blogging. As for my avocations, this became an unplanned reversal of priorities. After factoring in the day job and family obligations, I’ve come to realize that I can do one reasonably well but not both.

In order to refocus, I’m going to go cold turkey with this blog for the time being. My O.M. Poe biography has been in Kent State’s hands for awhile, which should have allowed me to make some headway on my next project. For the better part of the past year however, that book-length work on Detroit in the Civil War has languished while I’ve been a-bloggin’. I want to dive back into that book in the hope that it might be ready for the ACW sesquicentennial.

So for the time being, this blog is going on sabbatical. I’ll leave it up for those bibliophiles who might use it as a reference tool and I’ll certainly respond to anyone kind enough to write. Adios.

Lee's Lieutenants: A Study in Command 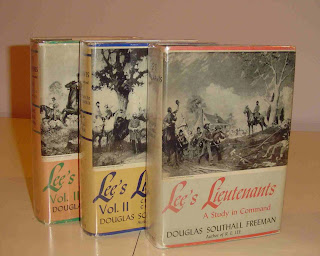 Douglas S. Freeman's Lee's Lieutenants is a cornerstone work for any Civil War library. This three-volume set was initially published during the WWII years (1942-45) by Charles Scribners Sons and according to Harwell's In Tall Cotton, "stands in its own right as one of the great works of military history." Praise is generally universal, though Freeman's tone occasionally becomes that of the Southern apologist. Nevins described it as "the ablest descriptive and evaluative study of the leading generals in Lee's army; massively documented, movingly written, highly authoritative, and faintly smug."

First edition copies seem plentiful, but like any books of this vintage, condition can be problematic. Look for the Scribner "A" on the copyright page to denote first edition status. Choice copies in jacket will obviously command premium prices. The pictured set, available here, features a rare Freeman signature and is available for a cool $5000.

The set has also recently been given the Easton Press leatherbound, gilt-edge treatment.

Posted by Paul Taylor at 1:42 PM No comments:

For those interested in such things, Heritage Auction Galleries will be conducting their "2008 November Signature Civil War Auction" in Gettysburg, PA. on November 20-21. The entire 954-lot catalogue is online here. It looks to have only one book so far, but many artifacts and paper emphemera.