Wayne State Univerity Press, the publisher for my newest book titled "Old Slow Town": Detroit during the Civil War has just completed the promotional video trailer which will be used on their website, social media and the like. Check it out!

Posted by Paul Taylor at 8:08 PM No comments: 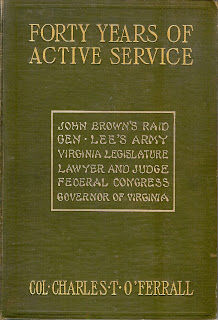 Just acquired this Neale book, published in 1904 by Colonel Charles. T. O'Ferrall (1840-1905). It just might have the longest subtitle ever: "Being Some History of the War Between the Confederacy and the Union and of the Events Leading Up To It, with Reminiscences of the Struggle and Accounts of the Author's Experiences of Four Years from Private to Lieutenant-Colonel, and Acting Colonel of the Cavalry of the Army of Northern Virgina. Also, Much of the History of Virginia and the Nation in which the Author Took Part for Many Years in Political Conventions and on the Hustings and as Lawyer, Member of the Legislature of Virginia, Judge, Member of the House of Representatives of the United States and Governor of Virginia."

Per the Neale bibliography, this ex-governor of Virginia (1894-1898) served in the 12th Virginia Cavalry and his reminiscences of their exploits are solid and valuable. O'Ferrall hailed from western Virginia and despite the strong Unionist sentiments in the area, felt his true allegiance to be to Virginia and the Confederacy. He enlisted as a private in the cavalry, quickly advanced to sergeant, and then promoted to major after displaying significant gallantry and promise in battle. O'Ferrall had advanced to colonel by war's end and was in command of all Confederate cavalry in the Shenandoah Valley. He was wounded 8 times during the war, including once so seriously that he was left for dead.

Copies shown here are generally in the $150-250 range and I suspect the book's collectability has as much to do with its Neale Book status as for the material contined within it.

Posted by Paul Taylor at 2:36 PM No comments: