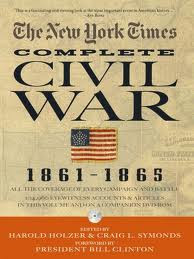 ... a copy of The New York Times Complete Civil War 1861-1865, which is a new, massive coffee-table reference work of all the Civil War reporting from this then-Republican leaning newspaper during the ACW. Included with the 500+ page book is a fully searchable DVD-Rom of every article that was published during that era. Profusely illustrated with scores of footnotes by editors Harold Holzer and Craig Symonds, this wonderful work is a must-have for any Civil War researcher or author.

All those trips to the local library to examine roll after roll of Civil War-era NY Times microfilm hopefully just ended. With books like this, the proliferation of Google Print, and the continued online digitization of manuscript material, I think the day is fast approaching, if not already here, where an author will be able to write a scholarly book without ever leaving his/her office.

Posted by Paul Taylor at 5:06 PM No comments:

I'm pleased to announce that I've signed an advance contract for my next book. The manuscript has the working title of "Old Slow Town": A Social, Political, and Military History of Detroit During the Civil War and will be published by Detroit's very own Wayne State University Press.

If all goes as hoped, I'll turn in the manuscript sometime in mid-to-late 2011 with the book then seeing print in 2013, at the height of the ACW sesquicentennial. 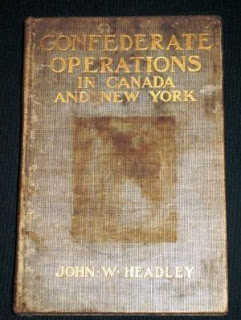 I’ve been working my way through this book as part of some ongoing research and thought I’d share its history here. From what I’ve gathered so far, it is the only primary source work pertaining to Confederate Secret Service activities in the north during the latter half of the war. It’s important to note however, that like so many other reminiscences, the author wrote this book well after the fact and therefore should be used carefully.

John W. Headley (1841-1930) was a Kentuckian by birth who worked in his father’s store in Madisonville at the age of twelve and by the time he turned seventeen had become an expert accountant. He joined the Confederate army at the age of twenty, later serving as a spy for General Braxton Bragg and then riding with General John Hunt Morgan. In 1864 he was sent to Canada where he served with the Confederate Secret Service under Colonel Robert Martin. In 1906, Headley’s book dealing with his wartime service for the Confederacy entitled Confederate Operations in Canada and New York was published by the Neale Publishing Company. That publishing affiliation is what gives the work its primary collector’s value. As I wrote in earlier post, first editions of Neale books are some of the most desirable Civil War books in existence.

Despite its title, a good third of the book deals with Headley’s adventures in the South during the first half of the war. After being sent to Canada in 1864, Headley then describes his various clandestine activities along with Confederate operations in general, discussing at length John Yates Beall and the ill-fated Johnson’s Island raid as well as Confederate attempts to burn New York City. First editions of Confederate Operations are scarce and expensive. As you can see here, there are only four first edition copies currently offered on ABE and none are in very good condition, as evidenced by the pictured copy offered here. For those just interested in reading the book, it is available via Google Print and Internet Archive.

Headley also authored "The Secret Service of the Confederacy" in Volume 8 of The Photographic History of the Civil War.

According to an online bio, Headley married in Tennessee after the war and then engaged in the tobacco business in Evansville, Indiana. From Indiana he moved to Louisville as a member of the tobacco house of Givens, Headley & Company. In his book he recalls that after the war he spent two years in Hopkins County, sixteen years in Evansville, Indiana, and twenty years in Louisville. Headley was a lifelong and loyal Democrat who served as Kentucky’s Secretary of State from 1891 to 1895 in the administration of John Young Brown. He is listed in the federal census of 1900 and 1910 as living in Louisville with his wife Mary J. and children.

Sometime after 1910, he moved to Beverly Hills, California, where he died on November 6, 1930. He is buried in the Inglewood Park Cemetery in Inglewood, California.

The Booktryst blog has a great post about how the so-called signed, limited edition of the ex-president's new memoir has turned out to be a sham, and serves as another cautionary tale to collectors. (Another earlier post here). The book was initially announced as being strictly limited to 1,000 signed copies with the hefty price tag of $350. Now it turns out that the print run is really 4,500 (!) copies because, according to the publisher, "there were a great number of consumers who expressed disappointment at not being able to purchase a copy and we sought to accommodate them."

As Booktryst accurately points out, "a print run of 4,500 is not a 'limited edition.' It is, in reality, close to the average print run for any new, trade (standard) edition book by a non-celebrity.... And the lack of a limitation statement in the book declaring the number of copies in the edition is a huge caveat emptor for the collector. A truly collectible limited edition book always states the number of copies printed."

It will be interesting to see if their prediction regarding this "bogus collectible" comes true: "In the future, sooner or later, copies in very fine (mint) condition of the limited edition of Decision Points will be selling for $75, tops. There are just too many of them." I would tend to agree with that. Good commentary and advice for book collectors of any genre in this one.