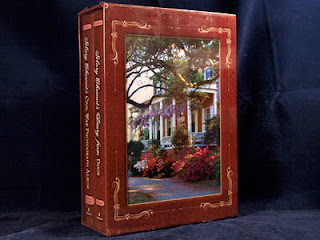 Collectors will be interested to learn that a beautifully illustrated, slipcased, two-volume edition of Mary Chesnut’s famous “diary” has just been released by Pelican Publishing. More on that diary in a moment, for in this case, the real treasure is the second volume, which consists of images from Mary Chesnut’s long-lost personal photograph albums. As I have yet to acquire a copy of this set, I’ll quote from Amazon, which states in part how these images were “Thought to be lost or stolen since the 1930s, the albums were only just rediscovered in 2007. An astonishing historical treasure, the photographs are annotated with information about each person depicted and edited by Chesnut's family. Photographs range from many of Jefferson Davis and other famous military leaders and statesmen to those within Chesnut's social circle: Gen. Wade Hampton III and his family including the Preston girls- and their suitors Gen. John Bell Hood and battlefield surgeon, Maj. John T. Darby; literary figures, such as writer Alexander Dumas; and many more individuals, including young soldiers of the elite Charleston Light Dragoons, Elizabeth Allston Pringle - the 'woman rice planter' of South Carolina, and Baltimore spy Hetty Cary.” In addition to the photographs, the reader learns the history of these images, why there were thought lost over the years and even stolen, and then the story of their partial recovery.

As for that famous “diary,” so oft-quoted in the Ken Burns’ Civil War mini-series, scholars and readers now know that her “diary” was really an 1880’s creation based on her notes and journals from the 1860’s, with Chesnut often deleting material not flattering to herself. Whether one

has the 1905 first edition, the 1914 second edition, or the 1949 edition of Diary from Dixie, “memoir” would perhaps be a better description of the original work than diary. Vann Woodward’s heavily annotated and Pulitzer-Prize winning Mary Chesnut’s Civil War, published in 1981, brought to light the many changes between the diarist’s original journals and the initial published work. It is now clearly the essential version. Three years later, Woodward published The Private Mary Chesnut: The Unpublished Civil War Diaries which published for the first time Chesnut’s extant and unedited Civil War journals. These two volumes paint the complete picture for the scholar, rendering that original 1905 work little more than a conversation piece of value only to the ardent bibliophile.

Nevertheless, if you're one of those seeking the 1905 first edition as published in New York by D. Appleton and Company, be prepared for a possibly lengthy search. As you can see here, only one copy in fair condition is currently to be found for sale on ABE, though two first British editions are also available. The 1914 second edition is pictured and is offered for sale here.

Posted by Paul Taylor at 9:01 PM No comments:

The World's Most Expensive Book?

Not what you might think... check it out here.

Posted by Paul Taylor at 2:14 PM No comments: