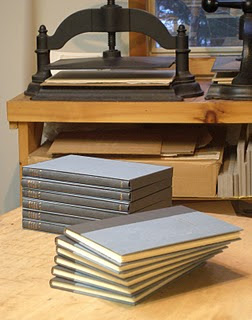 I'm hoping to clear out some shelf space so I've decided to offer some package deals on my own books. This offer will run until I generate the needed space!

Deal #1: Buy He Hath Loosed the Fateful Lightning and Glory Was Not Their Companion at the combined price of $50 (10% off retail) and get a trade copy of Give My Love to All Our Folks for FREE!

Deal #2: Buy Orlando M. Poe: Civil War General and Great Lakes Engineer at $50 (23% off retail) and get a trade copy of Give My Love to All Our Folks for FREE!

Give My Love to All Our Folks: The Civil War and Post-War Letters of Clinton DeWitt Staring and Charles E. Staring was my homage to fine press books and the old school idea of bookmaking as art. See picture at left and here for full details. I partnered with Deep Wood Press of Mancelona, Michigan on this one to create a slender volume of previously unpublished Civil War letters in a very limited edition of only 100 copies. That edition comprised 74 signed and numbered "trade" copies, as well as 26 signed and lettered copies bound in quarter leather and slipcase.

Posted by Paul Taylor at 6:53 PM No comments:

Kent State University Press, the publisher for my biography of Union engineer Orlando M. Poe, has informed me that the book is now available as a Kindle ebook in addition to its original hardcover format. The price will be $16.49.

This is the first time one of my books has been published in this format, so I'm looking for any feedback from fellow authors or publishers as to how your works have done to date as an ebook, as well as any promotional advice. Many thanks.

Posted by Paul Taylor at 2:20 PM No comments:

Life in the North During the Civil War: A Source History 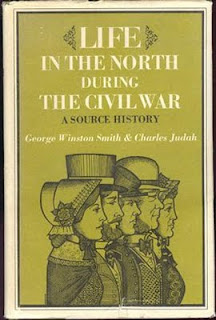 I came across this interesting title the other day while doing some research for my current book project. Published in 1966 by the University of New Mexico Press, Life in the North During the Civil War: A Source History is described as “a living record of ideological discord in the North” from Secession to Reconstruction.” Its focus is to present important primary source documents, almost in total, nestled in between the authors’ contextual commentary.

Authors George Winston Smith and Charles Judah have arranged their work in a thematic manner, writing on numerous issues that held sway on the Northern home front during the conflict. Chapters such as “Citizens as Soldiers,” “The Voice of Politics,” “The Negro’s Place,” as well as ones pertaining to the economy, social stresses, amongst others, are all presented utilizing letters, speeches, newspaper articles, diary entries, et al as the primary focus. The authors’ commentary is then woven in between each document to add valuable context and background. In so doing, the authors succinctly explore the roles played by Northern politicians, freedmen, businessmen, soldiers, and economists. (See Eicher, The Civil War in Books, #1001) Further adding to the work are plenty of period woodcuts and editorial “cartoons” that complement each chapter’s particular topic.

It is an attractive 400-page work measuring 6x9” and bound in full avocado green cloth. First editions are so stated on the copyright page (there probably were no additional printings). While the book is not uncommon in the secondary market, finding a nice copy that is not ex-library is more challenging, which is usually the case with university press titles.