"But It's Not A Lie If You Believe It's True" 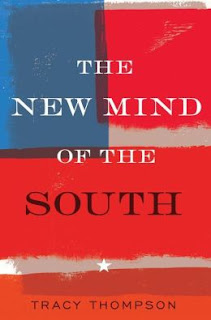 "The South Still Lies About the Civil War" says Tracy Thompson. Check out this excerpt here from her new book The New Mind of the South.

Posted by Paul Taylor at 3:26 PM No comments:

Lincoln's Critics: The Copperheads of the North 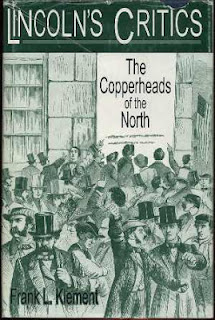 For a generation or two, Professor Frank L. Klement (1908-1994) was considered by many to be the leading authority on the Copperheads during the Civil War. The majority of his books and essays focused on those Democratic northerners who dissented against Lincoln and Republican war policy. His best known works include The Copperheads in the Middle West (1960), The Limits of Dissent: Clement L. Vallandigham and the Civil War (1970), and Dark Lanterns: Secret Political Societies, Conspiracies, and Treason Trials in the Civil War (1984). Considered a revisionist historian who spent his life carefully analyzing the primary sources, Klement's fundamental thesis running throughout his works was that the influence and danger of Copperhead and purportedly pro-Southern "secret societies" operating throughout the North had been grossly and intentionally overestimated by the Republicans for their own political propaganda purposes. In the case of these "secret societies," such as the Knights of the Golden Circle and the later Sons of Liberty, Klement asserted that they were little more than paper-based organizations that had been inflated by the Republicans to dangerous bogeyman status, but whose actual influence was negligible. As a nod to Klement's influence, James McPherson wrote that "although I did not always agree with Frank Klement's interpretations of the Copperheads, I found them unfailingly stimulating," and that Klement's books were "invaluable for anyone working in the Civil War field."

So in the course of some research for my next book, I came across this book and decided I'd like a copy for my personal library. Published posthumously by White Mane Publishing in 1999, the book is a collection of Klement's articles and essays written over the course of his life that, obviously, relate to the book's title. As it's only 13 years old or so, and published by a national Civil War-oriented publisher, I figured landing a copy would be inexpensive and routine.

Boy, was I wrong. The book appears to be out of print at the publisher, nor was I able to get a reply from WM as to whether there might still be a copy or two languishing in the warehouse. Then I went to ABE and discovered "only" 7 copies, the least expensive of which was $120 (!) and running as high as $400! Nor do any of the other internet bookselling sites I frequent have copies. Can anyone who reads this post offer some insight on this book? I'd love to know why it seems to be such an expensive book.

Posted by Paul Taylor at 3:07 PM No comments: