Lee and Longstreet at High Tide 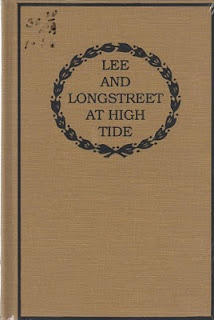 Georgia-born Helen Dortch (1863-1962) was thirty-four years old when she became the second wife of then seventy-six-year-old General James Longstreet in 1897. When Lee’s “old war horse” passed away six years later, he was still considered a persona non-grata in ex-Confederate circles. As part of the burgeoning Lost Cause mythology which fervently implied that Lee was blameless for anything, many of Longstreet’s ex-Confederate colleagues had for decades made him the fall guy for the loss at the battle of Gettysburg and further scorned him for the manner in which he sought to reconcile with Northern politicians and soldiers.

Following the general’s death, Helen Dortch Longstreet vigorously set about to rehabilitate her husband’s reputation. Her result was Lee and Longstreet at High Tide: Gettysburg in Light of the Official Records, a 346-page work that was privately published (i.e. vanity press) in Gainesville, Georgia in 1904 at a price of $2.75. In her book, she sets out to exonerate her husband through a close examination of the Official Records and concludes that “because of the scurrilous comments made by petty men, the South was seditiously taught to believe that the Federal Victory was wholly the fortuitous outcome of the culpable disobedience of General Longstreet."

David Eicher included Mrs. Longstreet’s work is his bibliography of the most important Civil War books (#90), and notes that her analysis was successful and that the case she presented was “strong in Longstreet’s favor.” At the other end, Allen Nevins considered the book to be “painfully defensive in tone” and that while her defense was convincing, it was “at times overdrawn.”

The book is considered an important one on the Gettysburg campaign and first editions are certainly viewed as collector’s items. Expect to pay $300+ for a copy in fine condition, if one can be found. Copies autographed by Mrs. Longstreet will certainly command a higher premium. Sales were such that a second edition appeared in 1905, which is so stated on the copyright page. The book was reissued by Broadfoot Publishers in a facsimile edition in 1988 that included a new introduction by Carl W. Breihan.

Artifact and Rare Book Handling: To Glove or Not to Glove?

The Most Expensive Book in the World?

According to Luxist.com, deep-pocketed bibliophiles will have the chance to bid for the world's most expensive book this December. There are only around 100 copies of John James Audubon's massive "Birds of America." The book, which contains 435 hand-colored prints and is more than three feet tall, last sold for $8.8 million in 2000. Sotheby's estimates that the book of four volumes could reach 6 million pounds ($9.25 million) when it is auctioned off at Sotheby's London on December 7, 2010. The sale will also feature a first folio of Shakespeare's plays dating back to 1623 which could bring in at least one million pounds ($1.54 million). These two amazing books come from the same collection, the estate of the 2nd Baron Hesketh, an aristocratic book collector who died way back in 1955. Hmmm....maybe if I raided my daughter's piggy bank....

Posted by Paul Taylor at 7:40 PM No comments:

A Texan in Search of a Fight 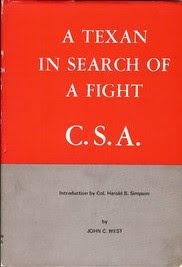 This small and slender volume represents the wartime letters and diary entries of Private John Camden West (1834-1927), who served in Company E of the Fourth Texas Infantry. It is considered one of the better primary source books for anyone with an interest in Hood’s Texas Brigade. According to an obituary and biography of West, he was reputed to have been one of the few who witnessed the death of "Stonewall" Jackson. West was born at Camden, SC in 1834 and married Miss Mary E. Stark there in 1858. After coming to Texas, he was appointed district attorney by Jefferson Davis, but gave up his post to enlist in Speight's Regiment of the Confederate Army in 1862. In the permanent Confederate Government he was again appointed attorney for Western Texas. Determined to see action in the Civil War, West again resigned his position and reenlisted with Company E, Fourth Texas Infantry, in April 1863; he fought at Gettysburg, Chickamauga, and Knoxville before being honorably discharged in February 1864. “Judge West” died in 1927 in the same home he was living in when he enlisted the last time. He was believed to be the last surviving member of Company E.

West’s wartime letters, most of which are addressed to “My precious wife,” form the bulk of the book. The diary entries cover the initial and final periods of West’s service; from April 9, 1863 to June 9, 1863 and March 8 to April 18, 1864. He was a very keen observer and as an educated man, he wrote well, often with a type of humor that is wonderful to read and so often endemic to Texans. According to Gary Gallagher, “West's book includes valuable information about the battles in which he took part, attitudes and concerns of soldiers in the ranks, and the nature of travel between the trans-Mississippi and the eastern Confederacy at the mid-point of the war.”

The first edition is quite pricey though not exactly rare as seen here. Initially published in 1901 by the Press of J. H. Hill in Waco, Texas, the first printing was considered a limited edition and is essentially a paperback original though with flexible orange cloth covers rather than paper wrappers. I'm still trying to learn how many copies were printed as in the initial run. Tom Broadfoot's Civil War Books: A Priced Checklist (5th Ed.) notes that there were two versions: one with an appendix and one without, the former being considered more valuable to collectors. Within a few short years, the book was already being viewed as a collector’s item. For those of more modest means, such as your humble correspondent, a 1969 facsimile reprint from the Texian Press (pictured) is certainly more affordable.

"The Protocols of Used Bookstores" 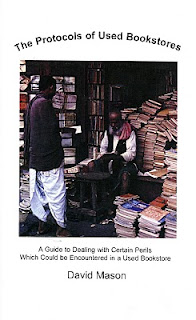 The title of this post refers to an eighteen page, serio-comic pamphlet written by David Mason, a fine and rare bookseller in the Toronto area. According to the author of this article, "Mason lists forty-four Rules to be heeded by the used and rare book buyer when patronizing a brick and mortar shop if they wish the proprietor to give them the time of day and a piece of their expertise as opposed to a time of death and a piece of their mind. Mason has put forth these rules 'to help make your quest for a book simpler.'

Number One on the hit parade is commonly encountered when a stranger enters the shop. "A library, huh?" Or its close cousin, "Books, eh?"

I'm going to have get one of these just for the laughs. Note ordering info at the bottom of the article if you're so inclined.

Posted by Paul Taylor at 8:59 PM No comments: