As part of the Civil War's sesquicentennial commemorations, the National Archives has assembled a travelling museum exhibition called “Discovering the Civil War.” After debuting in Washington DC earlier this spring, its first stop on its multi-city tour is in Dearborn, Michigan at the Henry Ford Museum, one of metro Detroit’s cultural crown jewels.

In its earlier press release, the National Archives describes that the exhibit will “peel back 150 years of accumulated analysis, interpretation, and opinion to take a fresh look at the Civil War through little-known stories, seldom-seen documents, and unusual perspectives. Discovering the Civil War presents the most extensive display ever assembled from the incomparable Civil War collection of the National Archives.”

With high anticipation, I set out yesterday to see the exhibit before it leaves town on September 6.

The first thing I realized was that the exhibit is presented thematically, rather than in a chronological fashion. Using the latest in interactive video technology on high-def touch screens at some presentations and more traditional glass cases at others, the exhibit sets out to ask some large questions and then presents numerous historical documents from its collections that the allow the visitor to form some answers. Most of the exhibit features letters, proclamations, photographs, etc. that have been blown up to a poster size facsimile for easier reading, often with the key passages highlighted for the reader. A nearby smaller plaque explains to the visitor what the document is, who wrote it and when, plus additional context.

Every possible theme is covered from women and the home front, who the generals were and their pre-war relationships, to more military-oriented topics such as foreign relations, espionage and the draft.

The role of slavery as the war’s central cause is, of course, front and center at almost every turn. How the war impacted free black men and women in the north is covered, as is the impact of reconstruction on blacks and whites alike. The exhibit concludes with a number of interesting presentations on the Civil War in our collective historical memory.

Visitors looking forward to seeing discussions of and documents pertaining to the war’s grand military strategies, campaigns or battles will be sorely disappointed. This is an exhibit that strives for nuance and therefore delves deep into the “why” of the war and how those answers impacted the course of the conflict. It seemed to me that any presentations that touched on the “battle” aspects of the war were almost an afterthought.

I can’t say I was surprised because this focus on slavery, emancipation, politics and the social aspect of the war is what is currently in vogue. And that’s understandable as the battle and campaign aspect of the war has, frankly, been covered ad nauseum over the past 150 years, IMO. If this exhibit comes to your home town, you’ll want to check it out.

Posted by Paul Taylor at 7:48 AM No comments: 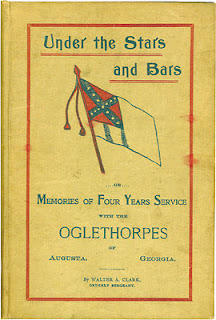 I came across this article from Fine Books and Collections magazine and thought fellow Civil War Book Collectors might be interested.

Of special note was the author's comment regarding pamphlets printed during the war. I own very few but it is an area where I've been seeking to expand my collection. Anyone else out there collecting pamphlets?