What a Boy Saw in the Army 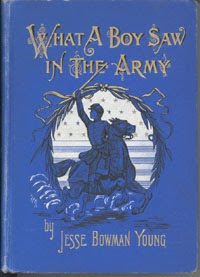 Jesse Bowman Young (1844-1914) was just seventeen when he enlisted in the 4th Illinois Cavalry in August 1861. Along with his uncle, Major Samuel Millard Bowman, Young saw action in the west under General U.S. Grant. Young then transferred in 1862 to the 84th Pennsylvania Volunteers; a regiment that fought with distinction at Fredericksburg and at Chancellorsville. When his uncle assumed command of the 84th’s brigade, Young served as his aide and then became a divisional staff officer, serving in that capacity with General Sickles at Gettysburg in the Peach Orchard. Young had obtained a captain’s rank when he left the army in 1864 but was enticed to return with the offer of a colonelcy in what were then called “colored” regiments. The war ended while Young was awaiting his assignment.

Young enrolled at Dickinson College following the war and graduated in 1868. Upon graduation, Young entered the ministry and served that calling for the remainder of his life, first in Pennsylvania but then mostly in the Midwest. During these years, Young became a keen author and lecturer on both religious and military subjects.

In 1894, at the age of fifty, Young published his wartime memoirs in a thinly disguised, third-person story he titled What a Boy Saw in the Army. The book was published by Hunt & Eaton Publishers and was bound in blue cloth with gold gilt trimming. A deluxe, leather bound edition was also released.

According to a biography of Young by John Osborne, “Young appears throughout the book as "the boy," and his companions in arms and the posts in which he served, as well as the field officers he served under, mirror exactly the teenaged Young's experiences. Young's approach in this book is light and personal. His touch is often engaging, as when he describes the retreat at Shiloh in a chapter called "The Boy Learns What His Feet Were Made For." He does not, though, restrain himself from vivid and bloody descriptions of the folly, cowardice, and confusion that accompany courage and sacrifice in battle. His method enables him to see and relate all these events through the eyes of a naïve and not particularly robust young man, prone to his own weakness and error. What the boy does not himself see, he "hears" from his friends on other parts of the battlefield and so provides an interesting view of the war's progress. He is particularly effective in conveying the boredom, the drudgery, and the hardships of the life of the Civil War soldier. From the cold and tedium of winter camp at Stoneman's Switch, Virginia, to the futility of Burnside's "Mud March," and then the hard slog of the forced marches to counter Lee's invasion of Pennsylvania, the lot of the common soldier is shown in detail. Young is also able to weave in the popular feeling among the men concerning their leaders, their "immunity" to the preachers passing through their bivouacs, the courage of the Christian Commission's service among the wounded, and the dismay across his regiment when the Emancipation Proclamation made their fight an explicit conflict against slavery.” As an added bonus, the book is laden with 100 illustrations, many of them commissioned especially for this book. The artist was Frank Beard, the widely known illustrator for religious and social causes who for years was the principal cartoonist for the Ram's Horn, a famous Chicago social gospel magazine.

Young's memoirs here, taken together with his comprehensive treatment of the Battle of Gettysburg in another volume, provide a useful set of perspectives on the Civil War at a time when many of its younger veterans, now in middle age, were beginning to publish their experiences.

First editions of What a Boy Saw in the Army are not uncommon though with any book of this age, condition can be problematic. As shown here, there can be a wide range of pricing based on condition.

Posted by Paul Taylor at 5:15 PM No comments:

There is an excellent article by Charles Michaud in the April 2012 issue of Firsts: The Book Collector's Magazine titled "Collecting National Park Service Civil War Publications." This essay discusses collecting a type of Civil War item that I had never even thought of, though that may now change. ;-)The piece also notes that "extensive checklists for this article will appear in next month's issue."

Individual articles are not available online though the magazine does sell individual issues.