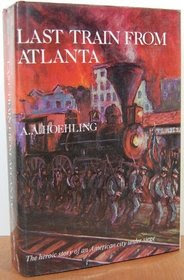 It's been way too long since my last post. I've been in a controlled frenzy over the past month attempting to wrap up my manuscript on the history of Detroit during the Civil War. After working on this project for just over four years, I expect to be able to send it off to the publisher no later than mid-November. From there, the peer review process will begin.

I did however, take some time out last night to speak to the good folks at the Monroe Civil War Roundtable in SE Michigan. They had a nice selection of used books for sale and from the offerings I picked up a gently used first edition of this post's featured book.

Last Train From Atlanta was written by Adolph A. Hoehling and first published in 1958 by Thomas Yoseloff. Throughout the Civil War centennial and for years after, it was an extremely popular book with the general public and was considered one of the better popular history books from its day that dealt with the Atlanta campaign. Allen Nevins noted in his Civil War bibliography that one of its better features was how it portrayed the effects of the fighting on Atlanta's citizens. In addition, Steven Woodworth cited this book in his The American Civil War: A Handbook of Literature and Research as a solid treatment that focused on Southern civilians dealing with the siege. The author's technique was to present to the reader a day by day reconstruction of the events as they occurred and the impact they had on the city's populace, as seen through the eyes of Atlanta's residents. A testament to its popularity is that it was given the Bonanza Books reprint teatment in the 1970's with those copies being most prevalent today.

First editions are bound in black cloth with silver lettering on the spine. There is no statement of printing on the copyright page though the copyright year must say 1958. As offered here, there was apparently a special limited edition, signed by the author. Despite its age, it is not a difficult book to find in first edition status nor is it an expensive title though, of course, condition is the key. That is especialy the case with this book as, due to its popularity back in the day, most copies one comes across will probably have been heavily read.

Posted by Paul Taylor at 5:36 PM No comments: