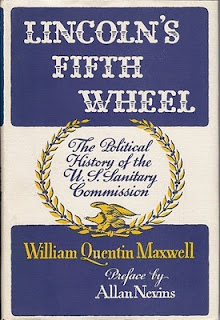 I picked up a beautiful first edition of Lincoln's Fifth Wheel: The Political History of the U.S. Sanitary Commission this past weekend in Chicago while participating in a booksigning at the venerable Abraham Lincoln Bookshop. Not only a first, but the signed "Camp and Field Edition" that was autographed by the author (William Quentin Maxwell) for members of the Civil War Book Club. Even though serious collectors know that the phrase "book club edition" is to be generally avoided like the plague, these books were publishers trade editions in every sense, but then had the special signature leaf bound in.

The title takes its name from Lincoln's remark as to how he feared the U. S. Sanitary Commission would become the "fifth wheel to a coach" after he reluctantly signed the the order that made the commission an official government agency. Initially, the Sanitary Commission was to merely monitor the health and sanitary conditions of Union camps, but it soon found itself well out into the field. It served troops in camp, on hospital transports, and even up to the battle line. Allan Nevins (1890-1971), who wrote the Preface, writes that "in a nation that had no medical association, no nursing schools, no apparatus for meeting a sudden strain on hospital facilities, it mobilized the best talent available for the war emergency." In his Civil War bibliography, Nevins summarizes the work as a "a scholarly and comprehensive narrative, covering all aspects of the treatment of the sick."

The book was published in 1956 by Longmans, Green and Co., has a price of $5.00 on the front jacket flap, and states "First Edition" on the copyright page. With ample footnotes, bibliography and index, this book offers an important look into an organization that formed an integral and often overlooked part of the Union war effort.

Posted by Paul Taylor at 8:20 PM No comments: 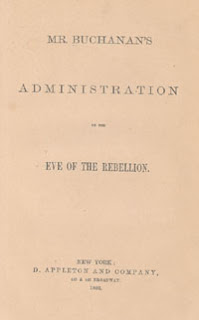 The Political Bookworm blog recently asked a number of past and present politicos to offer up their opinion of the least accurate political memoir ever written. While contemporary works get their fair share of raspberries, one Civil War-era memoir is suggested for the prize.

That book would be Mr. Buchanan's Administration on the Eve of the Rebellion, the presidential memoirs of James Buchanan, which was published in the U.S. by Appleton & Company in 1866. The true first edition however, appears to be the British edition, simply titled The Administration on the Eve of the Rebellion which was published in London by Sampson Low, Son, and Marston in 1865. The book was chosen by Douglas Brinkley, author and professor of history at Rice University. Brinkley writes that, "Buchanan had the gall to shirk all responsibility for the Civil War. He blamed everybody but himself for the dissolution of the Union. A pathetic memoir aimed at trying to exonerate himself from serial wrongheadedness and flatfooted policy initiatives. What Buchanan wrote was revisionist blather."

I admit to not being all that familiar with this book. From a book collector's perspective, American first editions do not seem to be all that common, yet on the other hand, not all that pricey either, despite being the first-ever published presidential memoir.

Posted by Paul Taylor at 8:08 PM No comments:

On Saturday, March 27 at noon, I'll be discussing and signing my new O. M. Poe biography at the Abraham Lincoln Bookshop's latest "virtual" booksigning. As their VBS website points out, "Virtual Book Signing™ provides the excitement of attending a booksigning, without having to leave your home. Sit on your couch in your pj's, sipping a margarita, and watch on the computer as your own book is signed. This is a true, 'real time' book signing. You are here virtually, watching an event unfold with you as a participant. You can interact with the author via email, order a book and watch it signed online. In a few days your book will arrive at your doorstep.... This new venture was introduced by Daniel Weinberg, an antiquarian book and autograph dealer, and proprietor of the Abraham Lincoln Book Shop in Chicago. 'Traditionally, book signings mean leaving home and then waiting in line in order to meet an author for a few seconds to get a book signed,' says Weinberg. 'Virtual Book Signing™ permits you to attend an in-shop booksiging without leaving home. You see an author speak via a streaming web cast. Then you may place an order and see the book signed while you watch.'”

The shop has maintained an archive of their past signings if you want to get an idea of what they're like. If you're a collector of signed first editions, this might be right up your alley. Sounds like fun and I'm looking forward to it.

Posted by Paul Taylor at 2:21 PM No comments: 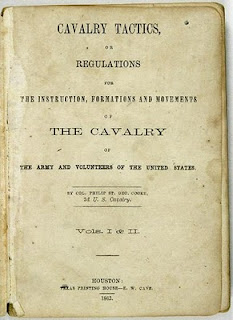 While doing some mindless book surfing through the internet the other night, I decided to find out what was the most expensive Civil War book currently offered for sale at AbeBooks (ABE). Using "Civil War" as a keyword search, I had to wade past all manner of antique prints, maps, artwork, manuscript material, etc., before finding my answer. Actually, the most expensive book offered was Gardner's Photographic Sketchbook, which I covered in a previous post.

After that, we get Cavalry Tactics, or Regulations for the Instruction, Formations and Movements of the Cavalry of the Army and Volunteers of the United States with an asking price of $8500. Admittedly, I've never heard of it, though I'm sure some of our cavalry experts have and perhaps can fill us in on its importance. (Eric?)

This copy is two volumes bound in one and is described as a good copy, in original condition. It is housed in a paper chemise and cloth slipcase within a pigskin slipcase. Further described as a Texas and Civil War rarity that bears a pencil inscription on the inside of the front wrapper: "D.F. Boyd, used in Confederate Army 1864." The book is described by the seller as "the rare Houston edition of the handbook of cavalry tactics that was used by both the Union and Confederate cavalry during the Civil War. It was written by Philip St. George Cooke, initially published in 1861, and then subsequently revised in 1862. The text is very thorough, covering all aspects of cavalry tactics and techniques. Cooke had a long military career, graduating from West Point in 1827, and he participated in the Black Hawk War and the Mexican War. He served as a U.S. Army observer during the Crimean War, and learned much about European cavalry tactics. He was a general in the Union Army during the Civil War, and is considered the father of the American cavalry. Interestingly, Cooke's son-in-law was Confederate Cavalry general J.E.B. Stuart, and Cooke's son, John Rogers Cooke, was a brigade commander in the Army of Northern Virginia. This very rare Houston edition was 'published by order of Lt. Gen. E. Kirby Smith, for the use of the cavalry of the Trans-Mississippi Department.'" If you're interested, see here.

Posted by Paul Taylor at 8:49 PM No comments:

Is There a Future for Book Collecting?

As someone who considers himself an avid collector of first editions, new changes in technology along with simple demographics sometimes makes me wonder about the long term future of book collecting. I’ve noticed many times at book fairs that most of the crowd is by far and away over the age of 40, if not 50. Then there was a recent stat I saw that stated there were only a handful of member book dealers of the Antiquarian Booksellers Association of America (ABAA) who were under the age of 40. That blends in with comments from over the years by longtime Civil War booksellers I know who see their oldest (and best) customers now liquidating the libraries they built over a lifetime, but that there are no new, younger collectors to take their place.

The founder of Americana Exchange, Bruce McKinney, takes on this troublesome issue of how book collecting is to survive if there is no one to mentor younger generations which rarely spend much time with printed books. Meanwhile, book collectors clubs, which have served this purpose for at least two centuries, have seen their membership numbers plummet in recent decades. Then there are the economics of the times we live in. As one collector noted, “I have half the money, books cost twice as much, and there are four times as many of them on the market.” Is the writing on the wall?

Are You Missing Some Rare Civil War Books?

If so, the New York Police Department would like to speak with you.

"In their search, police came across eleven Civil War books in excellent condition. Perhaps you or I would have assumed Ms. Kolompar was a Civil War book collector, but police are a suspicious lot. They assumed the heavily accented Romanian immigrant was a thief."

Check out the full story here.

Posted by Paul Taylor at 1:05 PM No comments:

Talk about yer obsession. Check it out here.

Posted by Paul Taylor at 8:43 PM No comments: