The Naval History of the Civil War 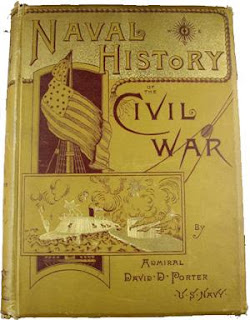 When the Civil War came about, he joined the Navy's Gulf Squadron in command of the USS Powhatan. Promotion soon followed including captaincy on February 7, 1863. Porter was well known for his role in the 1862 expedition up the Mississippi River against Confederate New Orleans, where he commanded 21 mortar boats and several steamers. He then commanded the Mississippi River Squadron during the Vicksburg Campaigns in 1862–63. Porter and his sailors were also active in the siege at Vicksburg which resulted in his promotion to rear admiral on July 4, 1863, the same day of the Confederate surrender at Vicksburg. His presence was again duly noted during the Red River Campaign in 1864 and 1865. In late March 1865, near the end of the war, Ulysses S. Grant invited President Abraham Lincoln to visit his headquarters at City Point, Virginia. William Sherman happened to come up to City Point from North Carolina at that time, with Porter also joining the group. As a result, Lincoln, Grant, Sherman, and Porter conferred together on the President's boat, the "River Queen." This four-way meeting is memorialized in the famous painting by George P.A. Healy, entitled The Peacemakers.

Porter was promoted to Vice Admiral in July 1866, and to Admiral on October 17, 1870. This made him the Navy's senior officer of the post-war era. His first assignment was Chief of the Bureau of Navigation of the U.S. Navy. From 1866 to 1870 he was Superintendent of the U.S. Naval Academy. In the post-war years, Porter wrote eight non-fiction books and novels. Most notable among them was The Naval History of the Civil War, a huge, oversized 843-page tome published in 1886 by the Sherman Publishing Co. of New York. The work is a straightforward, though obviously partisan chronological narrative of Union naval ops during the war. Considering the author’s rank and reputation, one would think the work would have the stamp of reliability, but that would apparently be an error. While the book is filled with a trove of interesting facts, official reports, tables, dozens of original engravings, and dramatic accounts of naval engagements, the book is also said to have numerous inaccuracies, especially with regards to the author’s recollection of dates and events. David Eicher reports in his bibliography (#11) that there “are many ambiguous references to names, a poor index, and numerous misspellings” nevertheless Eicher also writes that Porter’s book “shines with personal comments on commanders and battles in which Porter himself played a significant role.”

Considering the major and important role that Admiral Porter played in the conflict, the book is considered an early, important, and therefore collectible book on naval actions in the Civil War. Due to its sheer size and heft, most copies of the book have not worn well over the years, as such those in stellar condition will command a premium price. 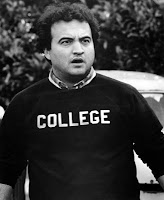 "While some college students are perfecting their beer pong, the Antiquarian Booksellers’ Assn. of America, the Fellowship of American Bibliophilic Societies, the Center for the Book and the Rare Books and Special Collections Division at the Library of Congress are teaming up to tempt them into the field of rare book collecting." Full story here.

Quite understandable. It seems that most serious collectors of first editions are 40+ years of age, if not 50+. Go to any book fair and see what I mean.

Posted by Paul Taylor at 6:46 PM No comments:

In late 2008, the Department of Justice threatened to file an antitrust lawsuit against Google unless it backed out of a deal to power search ads for Yahoo. Google agreed to nix the deal, leaving Yahoo to form a partnership with Microsoft instead.

Now, the DOJ might be getting ready to again flex its muscle with Google, this time to force the company to abandon ambitious plans to publish out-of-print books. The authorities argue in court papers that a proposed lawsuit settlement allowing Google to digitize and sell "orphan works" -- books under copyright whose owners can't be found -- would give the company an unfair advantage over competitors.

The DOJ said it was committed to working with Google, authors and publishers to reach a new settlement agreement, but it's not clear that any resolution will satisfy everyone.

For Google, however, the right to publish out-of-print books is central to its plan to create a new book registry. And in a larger sense, it's also in keeping with the company's mission "to organize the world's information and make it universally accessible and useful."

Despite the DOJ's position, Google, authors and publishers might not be all that eager to return to the bargaining table. Grimmelmann, for one, thinks it's more likely that they'll appear in court on Feb. 18 and make their case to U.S. District Court Denny Chin. "They parties don't have much to lose from presenting their motion for approval to Judge Chin," he says.

Meanwhile the Authors Guild is defending the settlement on its own blog. In a post titled "To RIAA Or Not To RIAA." the organization says it didn't want to risk litigating the key question in the case -- whether Google infringed on copyright by scanning books and displaying brief snippets -- because Google might have convinced the court that doing so was a fair use.

"If we'd lost, it would then be open season on scanning of your out-of-print and in-print books," the group wrote. "All one would need is a scanner and a friend with a little bit of technical knowledge to start displaying 'snippets' at your science fiction, humor, Civil War, or Harry Potter website."

Still, that scenario could happen even with the settlement. After all, Yahoo, Amazon or anyone else can scan and index books and, if sued, can argue that they had a fair use right to do so.

The organization also says that even had it won, the victory might not have amounted to much. "Copyright victories tend to be Pyrrhic in the digital age," the group said.

Of course, that raises the larger question of why the Authors Guild sued at all. If the purpose all along was to create a new book registry, perhaps the group would have made better use of its funds by lobbying Congress for new laws rather than forging a lawsuit settlement that might never meet with approval.

Posted by Paul Taylor at 8:21 PM No comments:

This Monday in Traverse City, MI

I'll be giving a radio interview this coming Monday, Feb 8, at around 9:10am on the Ron Jolly Show (580AM) out of Traverse City, MI. Then from 1:00 to 3:00, I'll be at Horizon Books downtown signing copies of my new Orlando Poe biography. If you're a visitor to this blog and in the area, I'd love to meet you so please drop by and say hi.

Posted by Paul Taylor at 7:33 AM No comments:

The Battles of Appomattox & The Final Bivouac 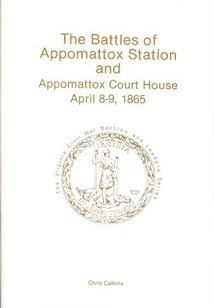 "Longtime Civil War historian Chris Calkins began looking for the lost battlefield of Appomattox Station in the early 1970s. Back then, he and many other Civil War buffs feared the site of the April 8, 1865 battle was buried somewhere under asphalt in the Town of Appomattox."

Thus begins this online article about how Calkin's dogged determination and Sherlock Holmes-like skills uncovered the site of the final battle at Appomattox that was then owned by a local trucking company and was in fact not commercially developed.

This wonderful story first appeared online at the Civil War Preservation Trust's website and can be read in full here.

As many serious students know, Chris Calkins is currently the park manager of Sailor’s Creek Battlefield State Park and a man who has devoted much of his adult life to studying the final days of the war in Virginia. He has written extensively on what transpired between Petersburg and Appomattox during the time of March 30 - April 9, 1865. 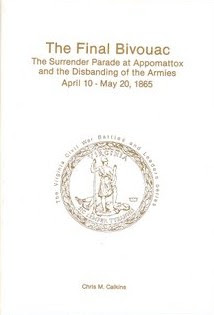 His first solo hardcover effort was The Battles of Appomattox Station and Appomattox Court House April 8-9, 1865. Published in 1987 when he was Park Historian at Petersburg, the 300-page tome was published by H. E. Howard Inc. as part of their uniform Virginia Civil War Battles and Leaders Series, which I discussed in a previous post. Calkins then issued a companion volume the following year titled The Final Bivouac: The Surrender Parade at Appomattox and the Disbanding of the Armies April 10 - May 20, 1865. That work vividly described the final surrender proceedings and then, for the first time ever as best I can tell, told the story of how the soldiers reacted to the news of Lincoln's death, featured accounts of the homeward bound Confederates as well as the northward bound Yankees.

Second and subsequent printings of these titles are probably easy finds, however as mentioned in that earlier post, finding a first edition of either of these titles, especially in the elusive white dust jacket may prove difficult. As you can see here, there is only one collectors copy of Final Bivouac currently offered for sale at ABE. As for The Battles of Appomattox Station, there is one first edition without jacket currently for sale, though second and later printings are plentiful.

Whether you are a collector or just want a reading copy, these two titles paint an excellent portrait of the final days of the war in Virginia.