Michigan has a statewide inter-library loan service known as MelCat. From it, a researcher can easily get library books held in other Michigan libraries that are not in the collections of his/her home library. It's a very smooth and efficient system, as long as what you're looking for is available for lending in a Michigan library.

For really obscure stuff, such as dissertations, that even though available to the public may be found in only one or two other institutions, the researcher had to rely on the traditional inter-library loan system. Just last night I contacted my home library and requested a dissertation from Northern Illinois Univ. that I had confirmed beforehand was available for loan.

Well, I've just been informed that as of July 1, that traditional ILL service to out-of-state institutions has been stopped in all public county libraries, "due to budgetary restrictions." The only advice was to get a card from a local college or university, which I've done in the past. Nevertheless, this was another indication of the times we live in....

At least my local library is still open, which is hardly the case all across the Wolverine State. Cie la vie.

Posted by Paul Taylor at 4:47 PM No comments: 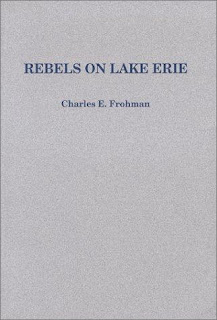 During the course of research for my current project, I discovered a slender book entitled Rebels on Lake Erie, a work by author Charles Frohman that was first published in 1965 by the Ohio Historical Society. Though still in print as a trade paperback, the original hardcover first edition appears rather scarce, and I really don't know if that edition included a dust jacket.

A review of the book from 1965 describes how the book "details the many plots formulated in the island regions of Canada and the United States to free the imprisoned 'flower of Southern manhood,', who could again take up arms under the stars and bars of the Confederacy."

The work had been serialized in the Sandusky Register in 1964 and early 1965 as part of the war's centennial and timed to coincide with the Confederacy's ill-fated raid on Johnson's Island on Sept 21, 1864. That island, which sits in Ohio's Sandusky Bay, is about a mile from the shoreline and was home to approximately 2500 Rebel POW's, mostly officers, from 1862-65.

Frohman's book also contains insights into the physical aspects of the prison, escapes, executions of both enemy and convicted Union troops by musket and the rope; the health and welfare of the prisoners; and the guard units. More than 30 rare drawings and photographs illustrate the 200-plus page volume. Also included are lists of Confederate dead buried in the island cemetery, a history of the island after the war, and poems by some of the 2500 men who at one time or another were imprisoned there.

The book reproduces a healthy dose of letters pertaining to the island and the rescue plots. A good starting point for those not familiar with the Confederate schemes to disrupt Great Lakes life that emanated from Canada.

Posted by Paul Taylor at 7:44 AM No comments:

If you're a booklover who buys or sells books via auction (think eBay), then you'll want to check out AntiquarianAuctions.com. The site was developed by Clarke’s Africana & Rare Books (ABA member) over the past five years during which time they've conducted over seventy successful online auctions.

Auctions are held every five weeks and run for a week at a time. They start and end at fixed times, extended time bidding avoids Ebay-type auction sniping. Booksellers upload their books to the auctions directly fully describing and illustrating them. Dealers sell under their own names and upon conclusion of the auctions they deal with the buyers directly: They are meeting new customers. There are no interfaces and no additional fees and commissions. Most important: There is no buyer's premium (premiums charged by auctioneers have grown steadily over the years and are now 25 % in some cases and should be challenged by the book trade).

Posted by Paul Taylor at 6:55 AM No comments: