Stuart's Cavalry in the Gettysburg Campaign by John Mosby 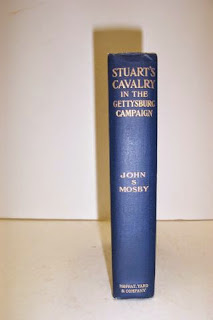 One of the great controversies in Civil War lore centers around the actions of Confederate cavalry general Jeb Stuart during the days leading up to the battle of Gettysburg. During those crucial days and even at the start of the famous engagement, Stuart and his cavalry were out of touch with General R. E. Lee, thereby denying Lee the crucial intelligence he needed as battle drew near. Was Stuart properly following Lee's orders when he and his men went off on their reconnaissance ride around the Union army, or, as the eyes and ears of the Army of Northern Virginia, was his lack of communication a serious dereliction of duty? In the years and decades following the end of the war, many of those ex-Confederates (including Lee's staff members) who were protectors of the Lee mystique indeed chose the latter route, heaping significant blame on Stuart and his actions as a significant contributor to the Confederate defeat at Gettysburg. 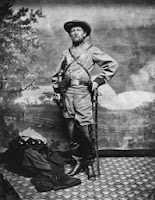 Enter Col. John S. Mosby (1833-1916), the legendary "Gray Ghost", whose Northern Virginia exploits in the saddle in service to the Confederacy were, like Stuart's, also well celebrated. Mosby served under Stuart and with this book, attempts to exonerate Jeb Stuart as the scapegoat for the Gettysburg defeat. With the book's first sentence, Mosby states his position and loyalties: "These pages have been written as a duty I owe to a soldier to whom a great injustice has been done."

A lawyer by training, Mosby carefully analyzes the written record, including Lee's own reports and contemporary correspondence to show conclusively that Stuart was not to blame for the Confederate defeat at Gettysburg. Even to this day, this work is considered a cornerstone on Confederate cavalry operations during the Gettysburg campaign (see Eicher #92).

The book itself was first published by Moffat Yard & Co. in February 1908. It was bound in navy blue cloth with gold gilt lettering on the spine and also featured a fold-out map of the campaign in the back of the book. According to Broadfoot's Civil War Books: A Priced Checklist (5th ed.), the first edition also came with a dust jacket, which I've never seen. From there, a bibliographic mystery has arisen. A "revised second edition" was published only nine months later in November 1908. What was the nature of those revisions? Additional material? For a publisher to do something like that only months later is unusual, nevertheless, my investigations have not yet yielded an answer. By the way, those second editions are easily identifiable as they will say "Revised Edition" on the title page and "Second edition, November 1908" on the copyright page. Though the book is not scarce in first edition status, fine copies are uncommon. Expect to pay in the $200-300+ range for a pristine copy; more if the dust jacket is present.

Posted by Paul Taylor at 8:15 PM No comments: