"There are currently fewer than ten members of the Antiquarian Booksellers Association of America (ABAA) under the age of forty. It's one of the dark jokes about the rare book trade that rare book shops are where old books go to die. In Korea it's becoming a reality."

Posted by Paul Taylor at 9:14 PM No comments:

Bartlett's Literature of the Rebellion 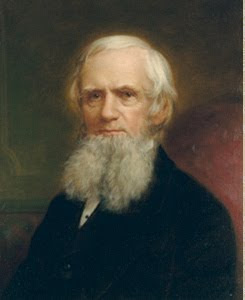 When I posted a week ago about John Page Nicholson's 1914 Civil War bibliography, I felt it might have been the first book of its type ever published. Boy, was I wrong. The true granddaddy of all such books has to be John Russell Bartlett's Literature of the Rebellion: A Catalogue of Books and Pamphlets Relating to the Civil War in the United States which first appeared in 1866, only a year after the war ended.

This hardbound book was fully cloth bound, published in Boston by Draper & Halliday, and clocked in at 477 pages. Like most obscure reference books, it was a very limited edition as it was printed in a total run of only 310 copies: 250 in royal octavo (roughly 6" x 9") and 60 copies in quarto (roughly 9 1/2" x 12") .

Barlett's book was the first and still one of the most comprehensive bibliographies on the literature of the American Civil War. Because of this, and as with the Nicholson book, Martino Publishers reprinted the book in recent years. It also still appears to be available direct from them at $65. Included are 6073 printed items divided into the following categories: 1] Books and pamphlets relating to the Rebellion and to related topics published anywhere, 2] Congressional reports and speeches etc., 3] Official publications of the several States covering the period of the war, 4] Official publications of the British government relating to the War, 5] Works on American Slavery, and several other headings. It's also available online at Google Print. This one looks like it might be indispensable for researchers seeking those obscure nineteenth-century pamphlets pertaining to the "Late Unpleasantness."

I've just learned that my new biography of Orlando M. Poe (pictured at upper left corner) has been selected by the Library of Michigan as a recipient of their 2010 Michigan Notable Books award. According to their website and press release, they review anywhere from 250 to 400 titles "published in the previous calendar year that are about, or set in, Michigan or the Great Lakes region, or are written by a Michigan author." From those, they then select "up to 20 recommended books reflecting Michigan's rich cultural heritage." This is my first award and, obviously, I am quite honored. 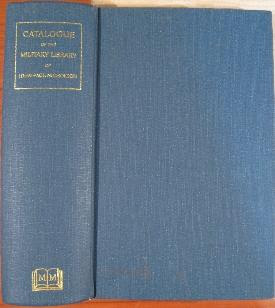 I love reference bibliographies because, as both an author and book collector, they always provide the bibliographic answers that I'm seeking. As I've opined on more than one occasion, "books about books" are at the core of any bibliophile's collection or author's working library.

Thus it's always a pleasant surprise when I discover one that had previously slipped under the radar - and that's exactly what happened this past week when I learned of the Catalogue of the Library of Brevet Lieutenant Colonel John Page Nicholson: Relating to the War of the Rebellion, 1861-1866.

This exceedingly rare book was privately printed in 1914 and limited to only 300 numbered copies. To the best of my knowledge, it can be considered one of the grandfathers of all Civil War bibliographies as it lists over 7,500 titles, all published prior to 1900. Newman and Long described the book in their A Basic Civil War Library: A Bibliographic Essay as "The most comprehensive bibliography of Civil War books before 1900." Nicholson did even more than that. He indicated the number of copies printed and listed the many variant printings in his "catalogue," which runs to a very hefty 1022 pages.

In addition, a review of the book in the April 1915 issue of Pennsylvania magazine stated, "No more important or valuable contribution to the literature of the War of the Rebellion has been published, than the catalogue of the library of Colonel Nicholson, comprising books, manuscripts, pamphlets, and excerpts, which are serviceably and handsomely bound." Most of Nicholson's books ultimately went to the Henry E. Huntington Library in 1927.

During the Civil War John Page Nicholson served as regimental quartermaster with the 28th Pennsylvania throughout Sherman's March to the Sea. He began building his great library as soon as the war ended in 1865 with much of his success in creating so vast a library being due to the ceaseless assistance of his many soldier friends. Though almost a century old, this work clearly retains great value as it contains information on limited printings not found elsewhere.

Fortunately for those of us of more modest means, the book was reprinted in 1995 by Martino Publishing of Mansfield, Connecticut in a very limited edition of only 150 copies (pictured). Though it appears to be sold out at the publisher, copies are available in the secondary market. For those interested only in the data, it is also available online at Google Print.

Posted by Paul Taylor at 7:10 PM No comments:

Just a Little Short of Cash for This One... 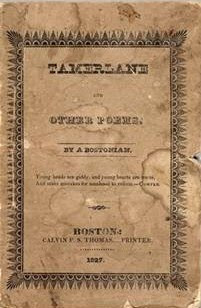 NEW YORK (Reuters) - An 1827 first edition copy of poems by Edgar Allan Poe sold for $662,500 on Friday setting a record for a 19th century book of poetry, said a spokeswoman for Christie's auction house.

"Tamerlane and Other Poems," Poe's first book as an author, was sold to an unidentified American collector. Only a dozen copies of the book exist from that first edition, said Jessie Edelman of Christie's. Full story here.

Posted by Paul Taylor at 9:36 AM No comments:

What's In Your Bathroom? 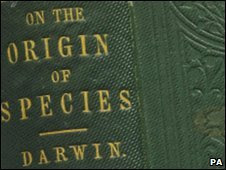 According to the BBC, a first edition of Charles Darwin's On the Origin of Species, which was kept in a toilet in Oxfordshire, has sold for nearly twice the expected price.

The book was kept on a bookcase in a guest lavatory at the owner's family home in Oxfordshire.

The revolutionary scientific work, which has the full title On the Origin of Species by Means of Natural Selection, had the original publisher's green cloth cover and gilt-decorated spine.

Christie's described the book, that was bought about 40 years ago in a West Country shop for a few shillings, as "lightly bumped" around the corners.

The Battle of Franklin 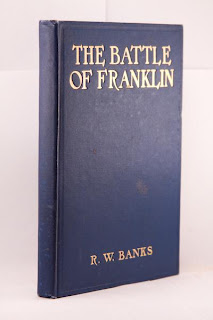 Yesterday was the 145th anniversary of the Battle of Franklin (Tenn.), one of the opening salvos ultimately leading to the virtual destruction of the Confederacy's Army of Tennessee. This battle in particular and Hood's Tennessee Campaign in general have received copious treatment over the decades, from General Jacob Cox's 1897 The Battle of Franklin, Tennessee, November 30, 1864 to the more recent Embrace an Angry Wind: The Confederacy's Last Hurrah, written by Wiley Sword and published in 1992.

One of the more obscure monographs on the battle and certainly one of the priciest from the collectors perspective is The Battle of Franklin, November 30, 1864, The Bloodiest Engagement of the War Between the States by Robert Webb Banks (1843-1919) and published in 1908. Banks was enrolled at the University of Alabama when the war broke out but he left after Shiloh and joined the Confederate army as a private, ultimately rising to the rank of captain with the 37th Mississippi Infantry by the time of this battle. Just how pricey is this book? The few first editions offered through the internet are currently commanding asking prices well over $500. In my opinion, its demand and value stem almost solely from the fact that it is a Neale book. And at only 88 pages long, it's probably the thinnest hardcover ever published on this engagement and one whose focus is certainly quite narrow. The title is a bit of a misnomer, as the book focuses on a small segment of the battle in which the book's author took part. In fact, in C. E. Dornbusch's Military Bibliography of the Civil War, this title shows up under the 37th Mississippi rather than as a source pertaining to the Franklin battle.

The Neale bibliography notes that Confederate Veteran reported in 1911 that they had bought up all remaining stock for resale and for promotional use. Morningside Bookshop reprinted the book in 1988 in a limited edition of 500 copies and is easily obtainable today.