"Gone With the Wind" Manuscript "Rediscovered"

Interesting story on the manuscript's history. I did not know that Margaret Mitchell's husband destroyed all of the manuscript in his possession following his wife's accidental death at age 49. Whether he knew or not about other sections of the manuscript existing is unknown.

...Snydacker continued. “Last summer, John Wiley, Jr., co-author with Ellen F. Brown on a recent release of a book called, Margaret Mitchell’s ‘Gone with the Wind’: A Bestseller’s Odyssey from Atlanta to Hollywood, called, knowing about the foreign language books. I went to the place where they were stored, scanned them for the author, and I was reminded of the 2011 75th anniversary of publication. So we began plumbing our acquisitions, and saw what we had while looking at the catalogue.” Snydacker told us. “So in the catalogue was listed this manuscript. We took it to the library committee and they agreed to take this public.”

Snydacker had it authenticated at Christie’s by Chris Coover, a senior specialist. “We carried it in a fireproof box and he verified that we had the long lost chapters. He was delighted with their condition. This small manuscript serves as proof of Mitchell’s work. Her husband did not know Brett had these last original typescripts.”

Check out the full article here.

I'd like to give a hat tip and thanks to Chris Wehner of Civil War Voices for his kind review of my book, Glory Was Not Their Companion: The Twenty-sixth New York Infantry in the Civil War. As the book specs in his comments point out, the publisher reissued the book last year in a trade paperback format.

Chris is also the operator of Soldier Studies, a well done, searchable archive of unpublished Civil War letters both blue and grey. I've added Civil War Voices to the blogroll.

Posted by Paul Taylor at 8:13 PM No comments:

Personal Recollections of the Civil War by John Gibbon 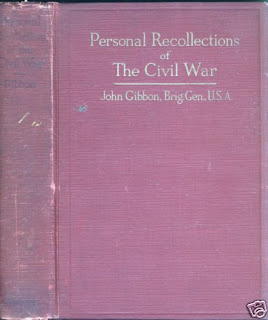 General John Gibbon (1827-1896) was one of those Civil War generals who seemed to have been everywhere in the Eastern theater, from the onset of conflict right up through the Appomattox surrender. His Civil War career began as chief of artillery for Irvin McDowell’s division, which was then followed by promotion to command of the legendary Iron Brigade at Second Manassas and Antietam. In November 1862, Gibbon was again promoted to command of the Second Division in John Reynolds’ First Corp. After being severely wounded at Fredericksburg, Gibbon was on the sidelines for several months but returned to duty in time to command the Second Division of Hancock’s Second Corps at Gettysburg. On two occasions during that engagement, Gibbon led the corps’ itself but was again wounded and carried from the field.

After regaining his health, Gibbon returned to division command for the Wilderness Campaign which led to a promotion to major general in June 1864. In January 1865, Gibbon was awarded formal corps command of the Army of the James’ newly-created Twenty-fourth Corps. At Appomattox, Gibbon was given the honor of being one of the officers designated to receive the formal surrender of Lee’s Army of Northern Virginia.

Following the Civil War, Gibbon stayed in the army and successfully continued his illustrious career as an Indian fighter on the Plains before formally retiring as a brigadier general in the regular army in 1891.

Gibbon began penning these memoirs in 1885 and were based heavily on his past diaries, letters, and personal notes. Post-war letters to and from current colleagues and ex-Confederates helped to flesh out his narrative. The general passed away in 1896 which led to his recollections sitting in a desk for over thirty years before they were dusted off by Gibbons’ daughter, who edited the manuscript and readied it for publication.

Personal Recollections of the Civil War was then published by G. P. Putman’s Sons in 1928 and from the beginning, received favorable reviews. That perception continues today with Gibbon’s memoir considered to be a candid, straightforward and important account of the war’s Eastern Theater. A contemporary review in the 1928 Book Review Digest described the work as “A volume of reminiscences which is one of the most readable and lifelike of any Civil War memoirs” and “a valuable addition to our knowledge of the Civil War.”

First editions can be readily had if you’re not picky about condition (such as the pictured copy), however copies in fine condition with dust jacket are surprisingly impossible to find, considering that the book was published by a major New York publisher and as relatively recent as 1928. In fact, I’ve been looking for ages and have never found one in acceptable condition. Note that I assume the book was issued with a jacket considering its vintage and the publisher. Reading copies are plentiful since Morningside published a facsimile reprint of the book’s original red cloth boards with gilt lettering in 1978 and then reprinted it years later in their standard format. Also surprising is that the title is not available via Google Print. Pictured copy offered here.

ABE (www.abe.com) has a new page where they show off and discuss a number of Civil War "battle" books. Check it out here.

Collecting Lincoln: The Making of a National Treasure 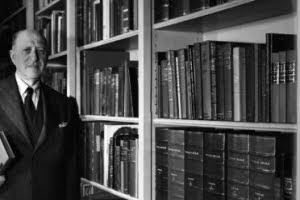 I found this very interesting piece about a man named Alfred Whital Stern (pictured at left), a clothing manufacturer who built one of the finest Lincolnia collections in private hands. In 1950 he donated the entire collection to the Library of Congress. According to the article, the collection is "comprised of more than 11,000 manuscripts, broadsides, portraits, political cartoons, newspapers, medals, artifacts, autographs and sheet music, and occupying its own room in the Washington library, the gift is known as the Alfred Whital Stern Collection of Lincolniana." And my wife complains that I have too many books....

Among its highlights is a letter written by Lincoln to Gen. Joseph Hooker in 1863 offering him the command of the Army of the Potomac. According to Evans, the letter purchased by Stern in 1941 for $15,000 “is universally regarded to be among Lincoln’s greatest compositions.”

Check out the full article here.

Posted by Paul Taylor at 8:35 PM No comments: