One of a publisher’s ultimate dreams has to be the creation of a line of books that one day are actively sought by bibliophiles based solely on the imprint he/she created, if for no other reason. Few small publishing houses achieve such immortality. In the realm of dark fantasy, Arkham House comes readily to mind while the Limited Editions Club, among others, is well-known in the literary world. 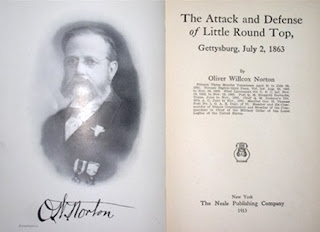 Most seasoned Civil War book collectors will immediately recognize the term “Neale Book.” Between the years 1896 and 1920, Walter Neale published close to 570 books, including ninety that are among the most recognizable and desirable Civil War books in existence. Such cornerstone classics include Recollections of a Confederate Staff Officer by Longstreet’s chief of staff, Gen. Moxley Sorrell; The War Between the Union and Confederacy by William C. Oates, the colonel of the 15th Alabama, and One of Jackson’s Foot Cavalry by John Worsham. Pictured above is the title page and frontis for Oliver Norton's Attack and Defense of Little Round Top. All of these early 20th-century titles as well as numerous others routinely command asking prices at $400 and higher for first edition copies in premium condition. If the oh-so rare dust jacket is also present and untorn, look for the price to soar closer to $1000.

Neale was staunchly sympathetic to Confederate beliefs as illustrated by the fact that his Confederate titles outnumbered Union ones by a five to one margin. To Neale, the war was “one of romance” and that his Confederate titles had helped to “clarify the atmosphere.” Had it not been for his efforts, the South’s views and military accomplishments would “have had but a small part in recorded history.” Even those lesser fiction and poetry titles have retained some intrinsic, collectable value simply by being recognized as a Neale book. Any Civil War library worth its salt will surely house titles that were originally published under The Neale Company imprint. 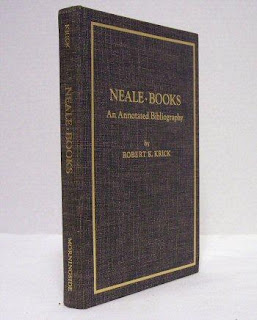 Such was the impact of this publishing house that historian Robert K. Krick published a bibliography of the Neale titles in 1977. Simply titled Neale Books: An Annotated Bibliography, the author lists all known Neale books in alphabetical order by author. Full bibliographic particulars are given as well as a brief synopsis of each title. Reproductions of title pages from key volumes are also liberally sprinkled throughout the text. This title is still available from Morningside House at the published price of $25 and is a must-have reference work for any Civil War book collector.
Posted by Paul Taylor at 6:28 PM