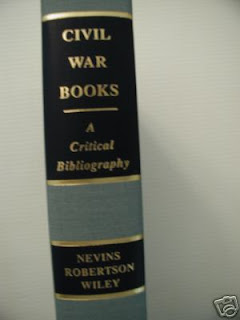 I once read and firmly believe that reference books and bibliographies form the core of any book collection, whether it's nonfiction or fiction. These can range from price guides to author bibliographies to critical analysis works. Into this last category comes a title that I picked up this week through eBay enitled Civil War Books: A Critical Bibliography. It's a one-volume 1996 reprint by Broadfoot Publishers of what was originally a 2-volume work published by LSU Press during the mid-to-late 1960's. The work was edited by Allen Nevins, James I. Robertson, and Bell I. Wiley, three of the twentieth century's most famous names when it comes to Civil War scholarship. As these men write in their preface, the purpose of the work was to establish an annotated, critical bibliography of the major works in the Civil War canon, all under the auspices and endorsement of the United States Civil War Centennial Commission. They point out that such a project had never before been so thoroughly undertaken, though several much earlier works had begun the process. Two in particular are very obscure, they being John Bartlett's The Literature of the Rebellion (Boston, 1866) and John P. Nicholson's Catalogue of the Library of Brevet Lieutenant Nicholson...Relating to the War of the Rebellion (Philadelphia, 1914).

It was obviously a massive undertaking. 15 esteemed professors of the day were each assigned a particular topic of the war with the task of determining the key titles within that area. The editors also point out that these volumes contain "bad works as well as good ones" and that "the overall aim of the project was to analyze those volumes familiar and unfamiliar, general or limited, indispensable or useless, for the benefit of anyone delving into the literature of the Civil War."
Close to 6000 titles are listed between the two volumes. In each case the editors state the usual bibliographic particulars, such as author, title, publisher, city, date published, as well as number of pages and trim size. A one or two sentence critical summary of the book then follows.
Since the work is now 40 years old, it obviously lacks all of the important scholarship published since then. Nevertheless, for researchers and those looking to build or expand their Civil War first edition library, it remains an invaluable reference tool.
Posted by Paul Taylor at 5:48 PM