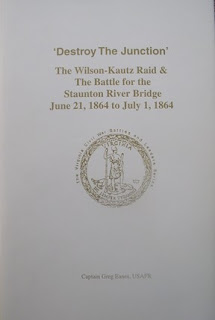 Over a roughly sixteen-year span from 1984 through 2000, H. E. Howard, Inc. of Lynchburg and Appomattox, Virginia published approximately fifty-seven matching volumes as part of their Virginia Civil War Battles and Leaders Series. According to what appears to be the only website pertaining to this publisher, the series focused on “the battles, leaders, cities, and significant events associated with the history of the Civil War in Virginia.” The series produced books that dealt with the role of various towns and counties in Virginia during the war, some biographies and memoirs, however the cornerstone of the series was its focus on the various battles and skirmishes that occurred in the Old Dominion state during the Civil War. To this day, some of these books still represent the only book-length work devoted to a particular topic, battle or engagement.

The H. E. Howard books were and are of interest to collectors for each title’s first printing was strictly limited to 1000 copies that were signed and numbered by the author on a special limitation page at the front of each volume. Further, every hardcover volume in the series was of uniform appearance, being nicely presented in a sewn binding of dark blue cloth with gold gilt lettering on the front and spine. To top things off, every title was presented in a rather austere though matching white dust jacket that featured nothing more than the book’s title, author, and series logo on the front cover and spine. Other titles in the series were listed on the back flap.
Those jackets have presented the biggest challenge to Civil War book collectors over the years. Being white, they became easily yellowed and soiled however the biggest frustration was that, amazingly, not every first edition copy was initially wrapped in a jacket. The story I was told by one Virginia bookseller was that the publisher, for whatever reason, felt that producing the jackets was too much of a hassle. He then opted to produce only a limited number of dust jackets for certain titles and this primarily due to the insistence on a number of long-term and original customers who wanted matching sets. In many if not most cases however, the few jacketed copies issued ended up in libraries. In any event, a jacketed first edition of a H.E. Howard title that is not a library discard tends to be a collectable book in the secondary market.
Most, if not all first editions of each title are long gone, though many of the titles have been reprinted and are still available from the publisher. Many are also sold at the battlefield visitor centers in Virginia.
Critically, it is fair to say that the books are of varied quality. Some have been written by a few of the most respected names in Virginia Civil War scholarship while others are, well, not.
Howard’s equally impressive sister series is the Virginia Regimental Histories Series, which we’ll explore in another post.
Posted by Paul Taylor at 5:29 PM

As the owner of many of the books in that series, I can tell you without any hesitation that the vast majority of them are not worth the paper that they were printed on. The production values are sketchy, the research often shoddy, and the usefulness limited.

It's a shame that more resources weren't devoted to making the series what it might have been.....

I also own a good number of the books in this series though admittedly, I've not read many of them. I enjoyed Chris Calkins' Appomattox books and the Five Forks one with Ed Bearss. Also, John Hennessey's Second Mannassas map study is a must-have for anyone studying that campaign. It served as an important reference work for my 26th NY regimental. Sadly, I've heard other well-respected authors like yourself echo your sentiments about the series as a whole.

Paul,
Thanks for clarifying the dust jacket thing. I could never see any rhyme or reason to which ones had it. None of my copies at home have one, and I only rarely see volumes with jackets in the used bookstores.

I've spoken with knowledgable book dealers who were adamant that a particular title was never issued with a dust jacket, and were then amazed when I told them that my copy had one. From what I've gathered from others, the whole issue was a real sore spot with the publisher, though that is just my opinion.

However, it seems like it was quickly written. There are obvious typos. It’s mostly a recap of where the regiment marched and fought. There was limited analysis of how the regiment fit into the big picture, and very little about what life was like in the regiment. I guess since they only anticipated selling 1000 copies of the book, they did not have the resources to do thorough research.

There were things left unsaid. The biggest example is that two regimental commanders were court marshaled and then returned back to service in the regiment. But there is nothing about what they were court martialed for or the proceedings of the court martial.

I am looking for Harold E. Howard. I was a student of his at Brookville High School (class of 1981) in Lynchburg, VA, and helped work on his book series, but he would have known me as Rene Farthing in my pre-Navy and pre-marital days. I read your blog post about his work, so if you are able to pass along my email address to him, I would be very appreciative.

I'm afraid I can't help you as I never met Mr. Howard personally. My understanding is that he has retired and all remaining inventory of his books have been sold.