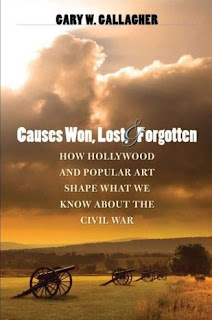 I recently finished reading Gary Gallagher’s Causes Won, Lost, and Forgotten: How Hollywood and Popular Art Shape What We Know About the Civil War. This is one of the current “hot” history titles being hyped within the mainstream media as it analyzes how Hollywood and popular contemporary art shape our understanding of those four years. I’ve been looking forward to this one ever since I learned of it earlier this year.

As trumpeted in the press, Gallagher offers up an in-depth explanation of what he considers the four key interpretive themes or “causes” of Civil War rememberance: The Lost Cause, the Union Cause, the Emancipation Cause, and the Reconciliation Cause. Each unique “cause” came into being during or just after the war and presented or explained the war’s origins in such a manner as to highlight its viewpoint, while perhaps minimizing or ignoring other factors that conflicted with its core beliefs. I'll let potential readers enjoy for themselves as to how Gallagher defines each cause.

The key element for the discussion of each cause is Gallagher’s excellent analysis of Hollywood’s Civil War films from the early part of the twentieth century to the present, with a heavy focus on the past twenty years. He concludes that while the Lost Cause may have dominated the interpretive focus in the first half of the twentieth century, its sympathetic Confederate focus and themes offend the politically correct sensibilities of modern viewers. Conversely, the Emancipation Cause is now the predominant theme in Hollywood’s public arena, which was heralded into vogue by the 1989 film Glory and continues to this day with offerings such as 2003’s Cold Mountain.

After finishing his analysis of contemporary cinema, Gallagher then turns to popular Civil War art, as depicted by such prominent artists as Mort Kunstler, Dale Galleon, Don Trojani, and others. His methodology was to closely scrutinize the advertisements from over 2700 issues of Civil War Times, North and South, and Blue and Gray magazine from their respective inceptions to the present. With such analysis, Gallagher could then measure which interpretative theme has held sway in the relatively private world of art offerings and purchases. In stark contrast to Hollywood, images depicting the pro-Confederacy “Lost Cause” mythology win hands down.

Within both sets of media, Gallagher points out that the literal “lost cause” is the Union Cause. That tradition, which was so predominant both during and immediately after the war, attempted to “frame the war as preeminently an effort to maintain a viable republic in the face of secessionist actions that threatened the work of the Founders.”

Professor Gallagher’s explanation of the four respective “causes” and how various films fit into one or more of them was most enjoyable. He considers each film and places its importance and message within the era in which it was released, providing further context. Nevertheless, I was hoping Gallagher would offer more “why” into his mix. In other words, why is the “Lost Cause” so popular in modern art yet anathema within Hollywood. The professor however, deftly dodges that contemporary political minefield by offering only the occasional opinion, such as how the disappearance of the Union Cause highlights the degree to which recent Hollywood culture no longer sees nationalism as a sufficient motivating force. To this end, according to Gallagher, modern Hollywood has tended to treat United States armies “whether rampaging through the Confederate countryside or in Vietnam, as largely malevolent expressions of national policy.”

I’ve attempted just a broad overview of this book, which I heartily recommend. As a political junkie, I know there’s an essay somewhere as to the “why” of Gallagher’s analysis.

Thanks for that great overview of Gallagher's latest. I was fairly indifferent to this book up till now, based on descriptions I've read, but your summary of it has piqued my interest enough to pick up a copy.

Thanks for the kind words. I should have also mentioned that Gallagher spoke with the various artists. They mentioned that to a large degree, what they paint is driven by their clients demands. Sales stats have shown that images depicting Grant, Sherman, or Sheridan simply do not sell nearly as well as those portraying Lee or Jackson. In other words, the [Civil War art buying] public gets what the public wants. Yet it would appear that from Hollywood's perspective, the public wants what the public gets.