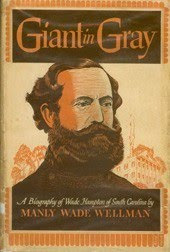 Long before I started collecting Civil War books, I knew of Manly Wade Wellman (1903 – 1986) as a classic science fiction and dark fantasy author. He was considered one of the old school masters of the macabre with numerous titles to his credit, such as Worse Things Waiting, which won the World Fantasy Award in 1973 and Who Fears the Devil, published by the venerable Arkham House publishers. To this day, he is considered quite a collectible author in science fiction and fantasy circles. He was also a popular writer of Civil War non-fiction throughout the 1950’s, including such well-known works as , Rebel Boast: First at Bethel, Last at Appomattox from 1956, and They Took Their Stand: The Founders of the Confederacy in 1959. His first Civil War book however was the first-ever life story of Confederate general Wade Hampton, titled Giant in Gray: A Biography of Wade Hampton of South Carolina.

Wade Hampton III was alleged to be one of, if not the wealthiest landowner in the South when hostilities commenced. He personally raised what would become known as “Hampton’s Legion,” which initially consisted of six infantry companies, four cavalry companies, and one artillery battery. Hampton then transferred to the cavalry after the Peninsula Campaign and ultimately led that arm of the service following the death of Jeb Stuart. He distinguished himself in his new role at the bloody Battle of Trevilian Station and purportedly lost no cavalry battles for the remainder of the war. In September 1864, Hampton conducted what became known as the "Beefsteak Raid", where his troopers captured over 2400 head of cattle and over 300 prisoners behind enemy lines. In the postwar years, Hampton was both a popular and successful politician in his native South Carolina as well as Washington.

Giant in Gray was considered to be “popularly written” by Nevins and “serviceable” by Eichner that moves along in a spry, almost novel-like pace. It appears to be sufficiently documented, primarily from printed sources though there are some manuscript sources as well. Since its appearance sixty years ago, several more bios of Hampton have appeared.

The first edition of Giant in Gray was published by Charles Scribner’s Sons in 1949 and can be ascertained by the presence of the Scribners “A” on the copyright page. No “A”, no first. Copies seem plentiful but as always, condition and the presence of a dust jacket can vary an older book’s value quite extensively. The title was also reprinted by Morningside in 1980 and is still available in HC from them.