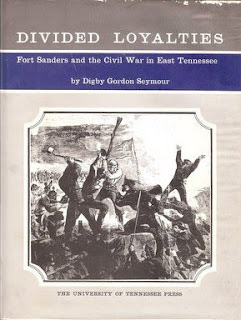 This past Tuesday night I had the pleasure of speaking to the Knoxville Civil War Roundtable on Union engineer Orlando M. Poe, who is the subject of my newest book. Poe played an extremely important role in the East Tennessee campaign during the fall of 1863 and especially the subsequent siege of Knoxville, as he was the man responsible for overseeing design and construction of most of the sixteen Union forts and batteries that ringed the city. Most notable was Fort Sanders, which was the target of the climactic and failed Confederate assault on the morning of November 29, 1863.

Prior to the talk, I was driven around and shown several of the town’s few remaining Civil War sites, including the well-preserved Fort Dickerson on the south side of the Tennessee River. We also drove past the spot where the famous northwest bastion of Fort Sanders once stood. It’s in the middle of total development and other than a few nearby historical markers and a UDC monument, you’d never know anything was once there, though the lay of the land still shows the high ground it was on and therefore, its importance to the Union defensive effort.

All of this, of course, got me thinking about important books that pertain to the East Tennessee Campaign of 1863. I couldn’t recall any detailed battle studies and considering all of the untapped sources that have been uncovered over the past twenty-five years or so, it’s evident that this campaign could really use a modern strategic and tactical study. I’d be amazed if such a project is not in fact already underway somewhere…. By far, the best book that has been published is now close to fifty years old, and that would be Divided Loyalties: Fort Sanders and the Civil War in East Tennessee by Digby Gordon Seymour (1923 - ), who was a practicing anesthesiologist when the book was first published. The first edition was published by the University of Tennessee Press in 1963 as an oversized 8 ½ x 11” hardcover (see image). Because of its size, it is a difficult find in collector’s condition. The book contains scores of historical photographs of the campaign’s major players as well as historical and early 1960’s Knoxville. Maps are not in short supply either, including one invaluable two-page spread that superimposes the locations of all of the Civil War forts, batteries, and lines over a modern (1963) street map of Knoxville. It’s important to note that East Tennessee was hardly a bastion of Confederate loyalty during the war. Unionism was quite strong, especially in the more rural area though the city of Knoxville itself proudly wore the gray. Seymour does a fine job of delving into the social aspects of this dynamic as well as the military movements of the competing armies.

The book has been reprinted a couple of times and a 3rd edition is currently available in hardcover or paperback from the East Tennessee Historical Society. Some feel this is a preferred edition as it features photographs and maps not in any previous edition, though I’ve also heard that the photograph quality is not as good as the first edition.