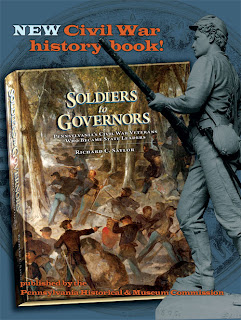 From the PR Newswire:

HARRISBURG, Pa., Sept. 22 In commemoration of the 150th anniversary of the Civil War, the Pennsylvania Historical and Museum Commission has published a book that traces the life of five soldiers who went on to be elected the state's chief executive.

Soldiers to Governors: Pennsylvania's Civil War Veterans who Became State Leaders was researched and written by Richard C. Saylor, an archivist for the Pennsylvania State Archives. Most of the material in the 196-page, full-color, and cloth-cover book has never before been published or exhibited.

"Five of Pennsylvania's first eight post-Civil War governors were veterans of the American Civil War," said Saylor. "This streak spanned four decades, from the election of John White Geary in 1866 to Samuel W. Pennypacker's final day in office, in January 1907.

"Even though these individuals rose to great political height and power, they did not forget their combat memories or neglect their old military comrades. Their war experiences shaped their vision and beliefs."

The author follows each of the individuals through his military service, discussing the engagements and battles in which he participated. Also included is an assessment of his political career.

In addition to photographs, "Soldiers to Governors" includes extensive endnotes, an index and bibliography. The book is available now at www.PABookstore.com.