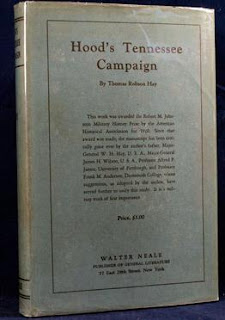 Though now close to eighty-five years old, this work still retains its status as an early and still important work on Confederate general John Bell Hood's ill-fated September - December 1864 campaign into Tennessee. In addition to four maps, the book features seventy pages of notes. An earlier incarnation of the work was awarded the 1920 Robert M. Johnston Military History Prize by the American Historical Association. Coupled with the fact that this book-length version was published late in the career of Neale Publishers and you have the makings of a very collectible book today.

Written by author Thomas R. Hay (1888-1974) from primarily a Confederate perspective (which was the case for most Neale books), the work begins with the opening of the campaign and proceeds toward the battles of Spring Hill, Franklin, and finally, the near-annihilation of Hood's command at Nashville. Hay then concludes his book with a discussion of Hood's retreat from Tennessee and how such losses spelled the end of the "lost cause."

First editions were published in 1929 by Walter Neale and Co., bound in blue cloth with black lettering on the front and spine. As you can see by the pictured copy (for sale here), the book was also originally issued with a dust jacket, which if intact will add geometric value to any copy in solid condition. The work was also reprinted by Morningside in 1976 and can be acquired from Gate House Press today.