The Battle of Seven Pines 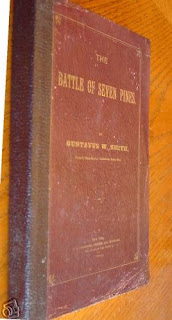 A scarce, 1891 first edition copy of The Battle of Seven Pines by Confederate general Gustavus Smith went for $237 this past week on eBay. This stiff-paperback copy was not in the best of condition and was an ex-library copy to boot, nevertheless the bidding appeared to get quite spirited in the waning moments. Frankly, I was a bit surprised as to the final price, thinking that it was higher than I would have predicted given the condition and ex-lib status. The interest though does seem to reflect bookseller opinion that rare Confederate titles are the current hot items in Civil War book collecting. In this case, the book represents one of earliest “battle of” books written by a leading participant and is noteworthy for that reason alone if for no other.

The first edition was published by the C. G. Crawford Co. of New York in simultaneous hardcover and stiff paperback versions. Hardcovers tend to command more as illustrated in this case by Tom Broadfoot’s Civil War Books: A Priced Checklist (5th Ed.) which has Smith’s book valued at $300 and $250 respectively.

Smith led a wing of the Confederate army during the Peninsula Campaign, however command of the entire army briefly fell on his shoulders after General Joseph E. Johnston was wounded while riding along his lines during the May 31, 1862 battle at Seven Pines, aka Fair Oaks. Within two days, command of the Army of Northern Virginia was given to Robert E. Lee. Allan Nevins described Smith’s book as a “detailed but painfully defensive tract” that often serves as the general’s podium to defend his own actions at Seven Pines; actions that were roundly criticized in the years after the battle for their tardiness. The book was reprinted by Morningside as a hardcover in 1974 and is currently out of print.