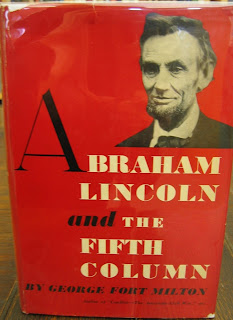 Research for my current book project has prompted me to purchase a copy of George F. Milton’s Abraham Lincoln and the Fifth Column, published by the Vanguard Press in 1942 and now out of print. This World War II-era book, described by historian Allan Nevins as a “classic work,” explores the “secret and treasonous societies” that purportedly existed in the north during the Civil War. Milton’s book was one of the first to delve into this topic and received much critical acclaim when it was first published, not surprising since the nation was embroiled in a conflict that called for patriotic fervor. The late scholar Frank Klement would later note how President Franklin D. Roosevelt was photographed holding the book while boarding a plane to visit with Churchill and Stalin. The president also plugged the book by equating dissenters of his era with those of the Civil War, even referring to both as Copperheads. Meanwhile, FDR’s attorney general also endorsed Milton’s book by proclaiming that it dealt with “the appeasers, the seditionists, and the faint-hearted of another day when the nation was in peril.” (And some think that the present administration’s tactics are somehow new…) It’s not a tough find if one just wants a reading copy, however first editions in choice condition with like dust jackets can be another matter. 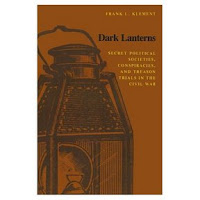 Modern scholars have not been so kind however. Klement, who was a leading authority on Democratic Party dissent in the Midwest during the Civil War, strongly refuted Milton’s book in his Dark Lanterns: Secret Political Societies, Conspiracies, and Treason Trials in the Civil War, published in 1984 and also recently acquired. He criticized Fifth Column as a “poorly researched and hurriedly written potboiler” that “read like a detective thriller.” His central thesis was that subversive, secret Civil War societies such as the Knights of the Golden Circle, the Order of American Knights, and the Sons of Liberty were never much more than paper-based organizations with vague goals and little ability to carry them out.

Most recent is Jennifer L. Weber’s Copperheads: The Rise and Fall of Lincoln's Opponents in the North, published in 2006 by Oxford University Press. The issue of vehement anti-Lincoln and anti-war plots in the Midwest during the Civil War is one I shall investigate further.